Timing belt - what is it? What will lead to the breakage of the timing belt, and how to prevent it

Modern car – is a complex mechanism consisting of a plurality of structural parts and assemblies. Among them we can mention the cooling system (ODS), gearbox (transmission), etc. One of the most important parts is the timing belt. What is the mechanism and how it works? All this and not only – further in our article.

Timing-belt - what is it? Feature

Timing Belt – this is the part that provides the synchronization camshaft and crankshaft. In other words, this element serves for the timely flow of fuel into the cylinders of the engine. Without this correct work of the engine and normal driving is just impossible. 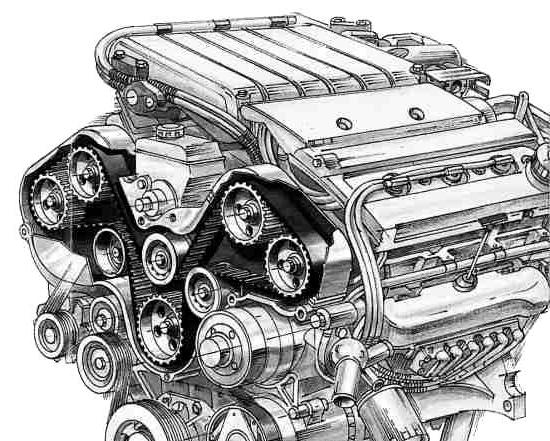 In addition to the two camshafts, the timing belt may operate the water pump which in turn circulates antifreeze in the cooling system. The considered element is of great importance for a car. The sudden interruption of the timing belt can lead to costly engine repair. But more on that later, but for now let's talk about the layout and design of this mechanism.

What is this element, we have already discussed, now, in what place he is. On most modern cars the timing belt is in front of the engine compartment, namely, between the cylinder block of the engine and the radiator. Depending on the brand of car, this detail can be hidden or already visible after opening the hood. But even the "masked" the strap it is easy to get, as its location carefully think through the automakers. The maximum that you want to do is remove a couple of plastic protection or decorative cover (latter is mounted on most luxury cars). Externally, the timing belt (photo of the mechanism you can see below) is a rubber toothed rim of the closed type. 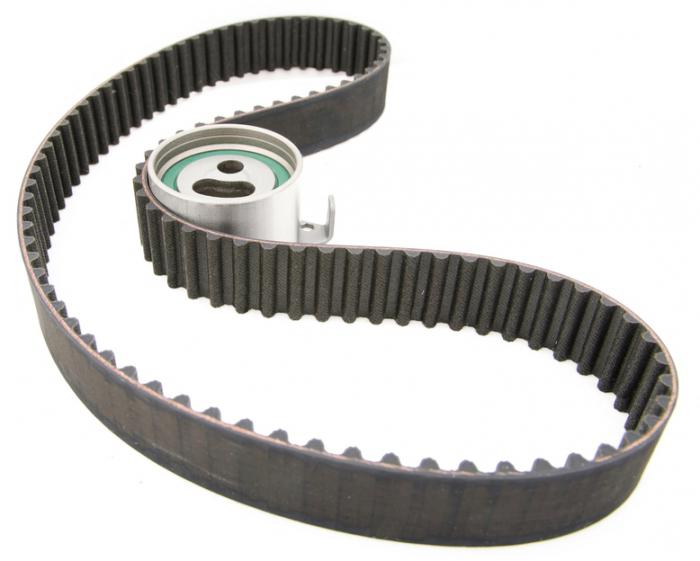 Teeth are on the inner side of the element. Also note that automakers do not produce a universal belts. They are matched to each machine separately.

A broken timing belt – a very scary phenomenon for the car. As we said earlier, the consequences for the engine in this situation can be very serious. To be more specific, when the belt breaks the camshaft stops in one position. As the crankshaft continues to spin on. In the end, the piston starts to hit the open valves and bends them simply. In some cases, the repair was not limited to the replacement of the deformed parts – had to restore the entire piston group.

Features of the cliff for 8 - and 16-valve cars

It Should be noted that the more complex the design of the motor, the more serious will the consequences be if the belt breaks. So, on a normal 8-valve engine you can get away with a simple replacement of the device. At the same time, 16-valve engine have fully restore the damaged valves and pistons (that is, replace it). But this does not mean that the ride on the 16-valve cars are very dangerous and that they are unsuitable for long distance travel. If you regularly follow external condition, the belt breaks you just are not threatened. Also, upon inspection of the gear element it is recommended to pay attention to the condition of the oil seals camshaft and crankshaft for leakage, as well as to diagnose the faulty idler rollers. Remember that the failure of these elements significantly affects the resource belt. 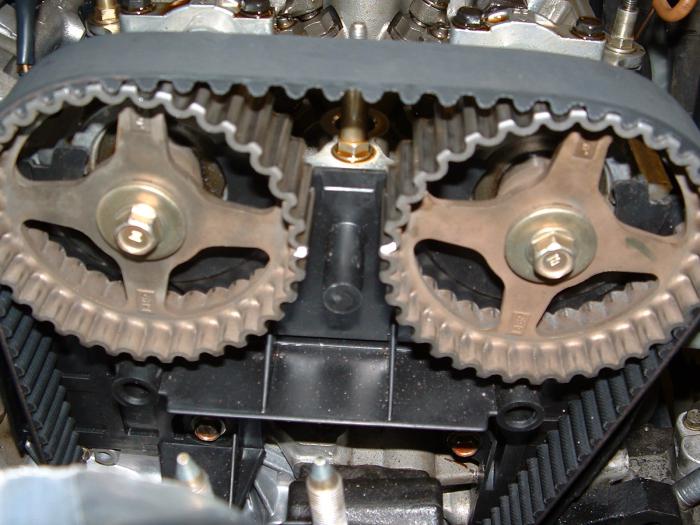 There are a number of reasons why failure occurs with the timing belt. Most often it happens because of wear or poor Assembly of the product. There is such a thing as fatigue of the material. Every day the timing belt loses its former elasticity, exfoliate it cracks. He also breaks due to a jammed pump and idlers. Less often this situation takes place in case of jamming of one or more camshafts.

Removal and installation with your hands

Replacing the timing belt with your hands is made as follows. Initially, the car's rear wheels are fixed recoil pads. On the front of the machine poddomkratit. This should remove the front right wheel. So we'll have access to the crankshaft pulley (it we also have to dismantle). How to extract the pulley? To do this, remove the drive belt, which spins the hydraulic servo, then remove the generator, candles (I cylinder must be at TDC) and the pump mechanism air-conditioning. Only then will the liberated path of the pulley. The latter can be removed by using puller or by hand. 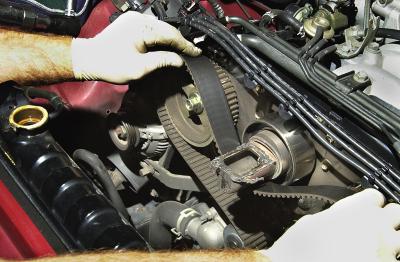 After all the above operations should remove the right support of the engine, which closes the cover, covering the timing belt. What will this give us? By removing covers us completely open access to the gear mechanism, and then we can safely remove. And removed the belt by loosening the fixing bolt of the tension pulley. Then safely take it out.In its place is mounted a new timing belt. It must be stretched with the spinning of the fastening bolt of the crankshaft. The remaining Assembly work is carried out in reverse order. In this question “how to replace the timing belt with your hands” can be considered closed. 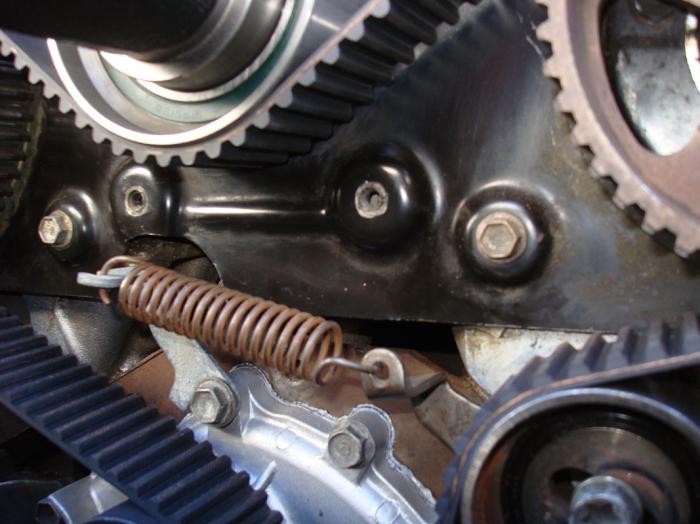 Nuances during the installation

Please note that the installation is not to prevent the rotation of the pulleys cranked and camshafts. They must remain in their seats. If done correctly, the engine operation will be harmonious and stable, without any extraneous vibrations and sounds.

Many motorists are asking the question: “When to change the timing belt?" it is Clear that the considered element is not eternal, and therefore eventually must be replaced. Especially if uest that not every belt is exactly as much as he was measured by the manufacturer. The fact that on the shelves a lot of defective parts and counterfeits. To distinguish them from the original very difficult, as the main (load bearing) part is inside the strap. In this case, orientirueshsya the pricing rule using the ‘middle ground". Also should not buy products without the original packaging and any tags.

But then again, the exact timeframe within which this item will be used for the benefit of your auto is very difficult to predict. You cannot install the belt and forget about it for the next 80 thousand kilometers. He can end 10 and 40 thousands, and will last longer than the specified period. To determine when to change the timing belt, with an accuracy of one kilometer is simply impossible. So every 3 months should monitor its external condition. He should not have micro cracks and delaminations. Otherwise, you expect a broken belt and, as a consequence, the repair of motor. And one more thing: this element must be always taut. You can check this in the following way. If the belt moves the fingers more than 90 degrees, then it must be stretched.

About the upcoming replacement also signals the smell of burning rubber in the place of installation of the structural element. As soon as you get the characteristic smell, it is better to replace it with a new one.

How much is a timing belt? The price of this item may be very different, depending on the brand and model of machine. Thus, the domestic «Lada», you can buy the item for 100-120 rubles. How much is the timing belt on European cars? In the case of modern cars class «Nissan Qashqai», «Kia Rio” etc. the price of this product can reach thousands of rubles. 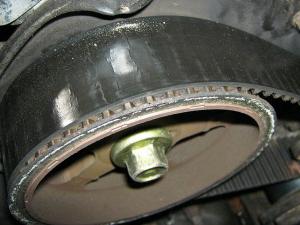 Services Such as the installation of the timing belt is on almost every HUNDRED. Depending on the brand of car and the complexity of its engine, this procedure will cost you 3-10 thousand rubles. But to change the strap by yourself, using the above instructions. As you can see, this process is not too complicated and requires a minimal set of tools.

So we figured out how to change the timing belt, what is the mechanism and how important it is for the car. As you can see, despite the primitive design, the fault of this element is fraught with expensive repairs of the vehicle. Therefore, regularly assess its condition, and the best carry in the trunk spare belt because when you open old further movement of the car may only tow truck or tow. At least to start the engine again with the broken belt is unlikely, not to mention the subsequent movement.

the Lada Priora in color "Perseus" – 4-door car class of the international classification, has a body of type "sedan" and is created for realization of trips on paved roads when the air temperature is -40° to +...

How to install roof rack on a Chevy with your hands?

the Cars, "Chevrolet" – this class of SUVs. They are considered roomy. However, in some cases, the rear trunk is just not enough for all things. So many are thinking about additional free space. Very often the owners of "Nev...

An overview of the redesigned SUV "Opel Antara"

In 2007 year, the European group "Opel" for the first time decided to try his hand in class full-size SUV class SUV, releasing the light of its new car called “Opel Antara”. Unfortunately, the first pancake w...