Rabbit, the grey giant. Breeds of rabbits: description and photos

Long known that "rabbits – it's not only valuable fur, but also 3-5 kilograms of dietary meat”. Perhaps this is all that most people know about rabbits. Although these healthy farm animals is to learn more. For example, there is a breed of rabbit, the grey giant. 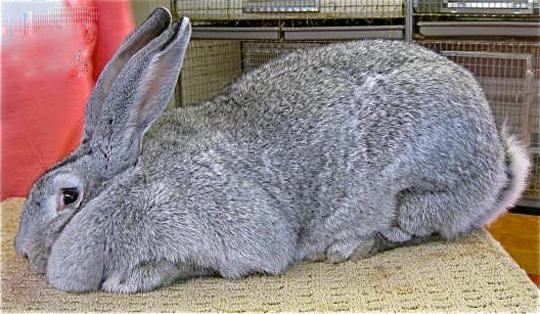 The First rabbits of the final version of the breeding of the breed were obtained in the animal-breeding sovkhoz «Petrovsky» Poltava region. Ended a long work in breeding in 1952. The work was carried out with rabbit breed Flemish giant and local breed rabbits. In the process the work was carried out culling rabbits that had desirable characteristics. Were left for breeding only those animals that could transmit to the next generation from the characteristics of the breed. The large mass and size were transferred from the Flemish giants. Good adaptability and high fecundity – from outbred animals.

Breed gray giant the same large size. The weight of an adult animal is 4-7 kg, but more often there are individuals at 5-6 pounds. The body of the rabbit in length - about 56-66 cm In principle, this animal is medium in size with massive bone structure. Rabbit has a large head, large ears, large feet. The legs of the rabbits of this breed are long and straight. The chest can be up to 40 cm in diameter.

Rabbit, the grey giant is not too thick, but quite sturdy and warm wool. The undercoat is lower than in animals bred for their fur (such breeds of domestic rabbits, like Soviet chinchilla, black brown or blue Vienna). 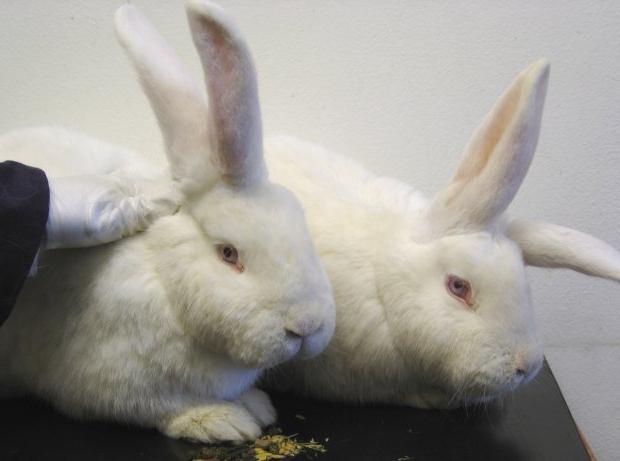 Within the breed of these rabbits there are several colors. The most common dark gray color. But sometimes grey hare and iron-grey coloring. In addition, despite the name, the rabbits of this breed may have white or black colors. In a situation when rabbit standard color appear young of other shades, you shouldn't pay attention to it. Characteristics of the breed, these animals are fully present.

In rabbits with grey rabbit painting, paws on the inner side and the abdomen are entirely white, and the axial hairs have uneven color.

Like other rabbits of meat breeds, these animals need fresh feed. A very important role in the proper raising of animals plays fresh grass and vegetables. For proper digestion it is necessary to avoid overfeeding animals herbs such as alfalfa or clover field. In young animals the abundance of such food causes bloating of the stomach. In order to avoid such problems these herbs need to jerk before feeding. You need to give the grass to lie down in the shade for two days.

The Bunnies will be very happy with fresh vegetables, such as carrots, cabbage, zucchini, pumpkin, squash, radish. Well they eat peas and corn, but these crops should be given in very limited quantities, as they can damage the digestion. 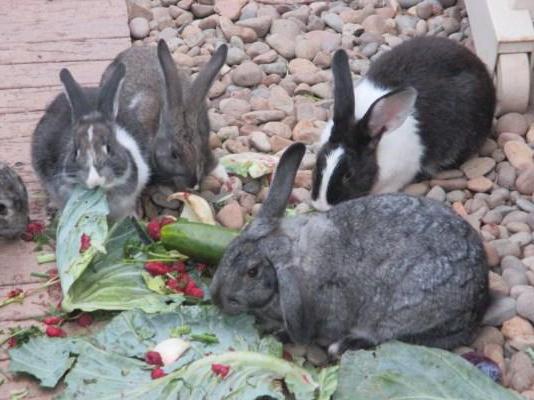 It should be noted that feed these (and all other) rabbits wet grass is strictly prohibited. During rain the grass should be dried. If this is not possible, it is better to give hay than to feed wet grass. Of course, to give spoiled, rotten food animals aren't allowed in any case.

In addition to the herbs and fresh vegetables rabbits feed and grain. Animals love this food, eat it well, but here it is not necessary to give in to them and feed them grain all day.

What would the rabbits nor the fed, they need clean water to drink. Better not to put the fluid in the public domain, and to equip housing animals in special drinkers. Then the water will remain pure, and the health of the rabbits will not suffer.

Breed gray giant (like other rabbits) – rodents, they have continuously growing incisors. To give the animal the opportunity to properly grind the teeth, you must make sure to have them in the aviary have always been branches of plants. If animals are reared in wooden cages, they will chew on cages – that's the nature of rabbits.

Rabbit, the grey giant quite sociable and friendly animal, so they can contain not in cages, alone, and in the cages in droves.

The Main condition for healthy maintenance of rabbit – purity. Clean the cage from the litter must be regularly. At least two times a year it needs to be disinfected with chlorine, slaked lime or a blowtorch. It is especially important to monitor the purity of the rabbit to prepare for the birth of the baby. Before the arrival of the new animal should also be disinfected.

Rabbit gray giant will perfectly coexist not only in the cell, but in the shedau, and in a city apartment. Animal well tamed, so can be a great pet for any family.

Table of Contents rabbits in cages 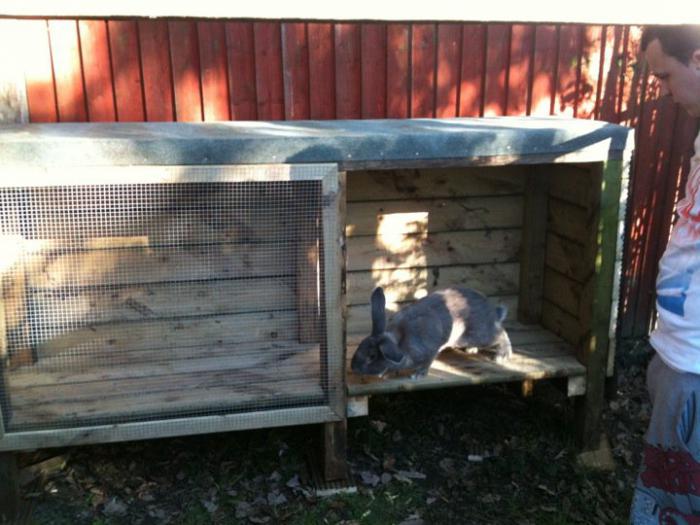 The Cagestreet content should not be less than 40 cm in height, 60 cm in length, 36 cm in width. The roof should be opened for convenience of maintenance and inspection. The cage should stand in a bright place, but protected from the heat. Must be water and food. Floors need to upholster sheet to protect rabbits from rats. If rabbits have two storey cage – walls of the second floor should also be pressed tin.

Table of Contents in the pen 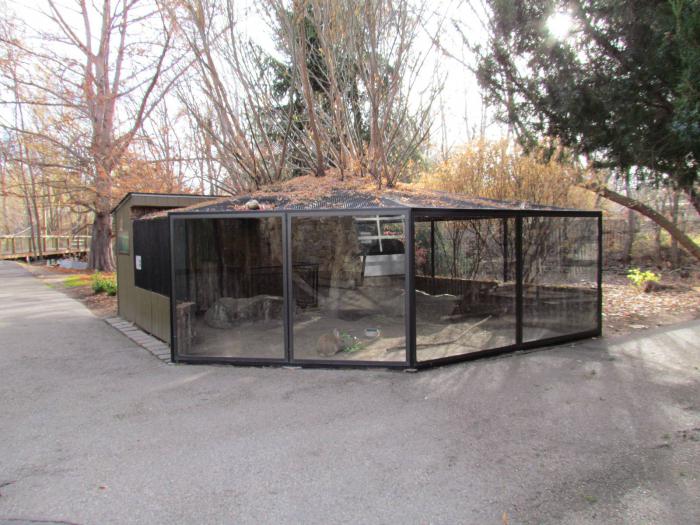 When the content in the pen it is particularly important to monitor the cleanliness, as rabbits in no case should not run on manure. The bedding needs to constantly change, preventing dampness material.

Contents of rabbits at home

For keeping rabbits at home suitable metal lattice cage with trays, for easy care. In such cells should also be water in the drinkers and always fresh food. Rabbit, the grey giant is not suitable as toys for children. His character was quite friendly, but his size does not allow the child to cope with the animal. Therefore, the child can only deal with feeding your rabbit, or should I consider another breed.

A Very important aspect when considering the breed of the rabbit grey giant – a breeding. Significant role played by natural fertility-rabbits of this breed. In one breeding the female gives birth to 8 baby rabbits. Sometimes rabbits appear and 14, but still quite rare. The undoubted advantage of breed – rabbit never eat newborn babies. Milk of eared mother enough, so you can leave all the new born babies breastfed.

Start to bear offspring female rabbits are unable to the age of three, but better than the first sluce to spend in 5-6 months. Pregnancy lasts 28 to 35 days. On the approach of childbirth indicate perturbations rabbits – this usually occurs approximately on day 25 of pregnancy.

When a pregnant DOE-rabbit begins to tear out hair, it means she has started to build a nest. Most often, the rabbit, the grey giant begins training for 3-4 days before giving birth, but some females can begin establishing nests and immediately prior to the kindling. 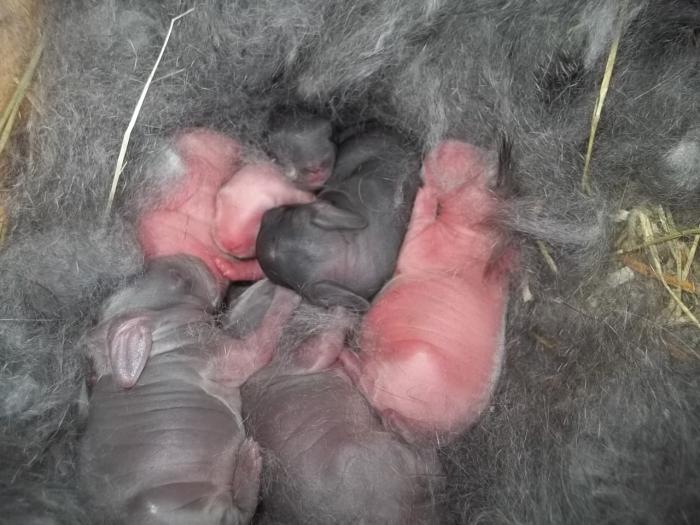 The Main percentage of births are early in the morning, so thoroughly research the place around the cage and nest – a newborn baby can crawl away from the mother and die from hypothermia. To intervene in the process of childbirth is not worth it. The exceptions are cases when the rabbit is obviously unable to cope and she needs professional help. The shell on the small rabbit rabbit relieves itself. The placenta also removes it.

If at first it seems that the rabbit does not young – this impression is deceptive. Rabbits are not like other animals, they can go on to the offspring a couple of times per day, and for a very short time. From the nests, the rabbits begin to get out after opening the eyes – about 12 day. If you noticed a blind rabbit out of the nest, put him in his place, because he could die.

During pregnancy and feeding of babies care and extra nourishment are necessary to females of any breed of rabbits (the name does not play a role). The gray giant will require additional care cage and more food with protein.

Newborn rabbits weigh about 80 grams. With proper feeding and care to the 2 months they weigh about 1.5 kg To four months of healthy animal is gaining 2.6 kg. If necessary, higher in rabbits diet, you need to add feed rich in protein.

To Transplant rabbits from their mother at one month of age. 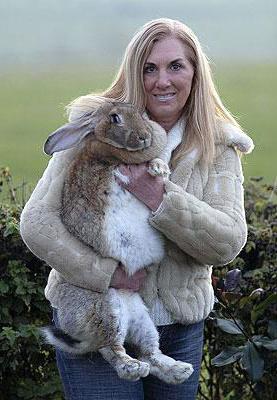 The Use of rabbits

Representatives of the breed grey giant – the rabbits of meat breeds. The main objective of their content – this is the meat that has high taste and dietary qualities. Rabbit meat refers to the varieties of white meat. For people with various diseases of the gastrointestinal tract it is truly a perfect food as it contains protein more than meat of other animals, as fat is much less.

In the treatment of oncological diseases is very important to include in the diet of the meat of young rabbits. This is due to its interesting and useful the ability to reduce the dose received during treatment of radiation. It is curious that the body of the rabbit is under 7 months of not taking the strontium-90, which is the breakdown product of herbicides and pesticides.

Visceral fat rabbits is a great healing tool. Since this fat is also a reliable anti-allergic agent, it is used in the manufacture of cosmetics, using as a basis.

The Most diet will be a three-month rabbit, the grey giant. The price of this meat, but benefit from it much more. Buy rabbit weighing about 400 rubles per kilogram.

Approximately in the 50-60-ies of the last century, the development of traditional tube artillery in the USSR almost stopped. Then the military doctrine prevailed the opinion that the future – for missiles. In such circumsta...

Immediately after the Second world war, the world has experienced a radical redistribution of spheres of influence. In 50-ies of the last century formed the two military blocs: NATO and the Warsaw Pact countries, which the followi...

closed joint-stock company – is a commercial company that opens one or more of the founders. This may be foreign citizens or subjects of the country in which the offer firm, but their number should not be more than 50 people...