"The dwarf Doberman does not cause discontent and irritation, knows neither timidity nor fear. Thanks to his innate intelligence, he is able to pass the exams of guard dogs, and miniaturization is not a hindrance here!" These words were written about pinscher by Werner Jung. To challenge the opinion of a person who has devoted his whole life to the breed is stupid.

At the peak of popularity...

Let's not dwell on the details of the exterior of the pinscher (popularly called a dwarf Doberman), because this information is easy to find in all known sources: dog magazines, books, websites, forums. We will remember the general features of its appearance, the history of the formation of the breed, talk about the characteristics of the character and get acquainted with the basics of care. 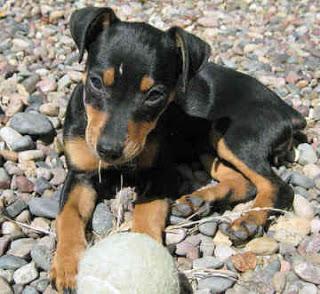 So, the dwarf Doberman (the price, first of all, depends on the "stardom" of his parents and compliance with the standard) is the smallest representative of pinscher and schnauzers. Today, this breed is at the peak of popularity, and interest in it is growing, the number of nurseries engaged in its breeding is increasing annually.

The dwarf Doberman was bred about a century and a half ago. At home (Germany) he was called "ratler", or "rat catcher" (rattler-rattenfanger). This occupation, most likely, was the first purpose of the breed. However, soon the dwarf Doberman began to guard the yards and accompany the wagons. Now it has been renamed the "stable pinscher".

Then they were both smooth-haired and rough-haired dogs. The former have now "turned" into pinscher, and the latter into affenpinscher, Schnauzer. The dwarf pinscher received recognition in 1880 . At the same time, a description was made and a standard was compiled. 15 years later, Josef Bert founded the first "Pinscher Club". Officially, the standard was adopted only in 1967. They tried to refine the breed as much as possible. Doberman Pinscher appeared before us such a handsome man thanks to the efforts of breeders.

In Russia, for unknown reasons, the breed did not take root for a long time. The dwarf Doberman, which does not attract the attention of breeders, practically "disappeared" into the back streets of home breeding, which gave its "fruits". We still meet small dogs resembling a dwarf Doberman, with bulging eyes, hysterical, angry and poorly controlled. Fortunately, the breed found recognition in Europe and continued to develop. At the end of the last century, representatives of the pinscher began to be imported back to Russia. It was the second birth of a dwarf Doberman, this time very successful. The price ranges from 500 to 1500 USD on average. The dog is correctly and harmoniously built, up to 30 cm at the withers, with a square format, with a proud posture. The color can be either black and tan or red (with different intensity). Wool — the outer hair, without undercoat and receding hairline. The limbs are muscular, rather dry, strong. Moves easily and freely.

He is very affectionate with his own, can show aggression towards strangers. Loyal and fearless. Perfectly trained. Clean. 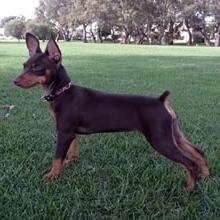 A little bit about care and upbringing

A cheerful, cheerful and charming dog may well brighten up the loneliness of elderly people or become a companion for a young couple. However, the breed is definitely not suitable for those who dream of buying a live little toy for a child.

The upbringing of this pinscher should be fair enough and, of course, consistent, otherwise the owner of the house will not be a man, but a dog.

Her care is as simple as possible. Periodic (but not frequent) shampooing and combing is enough. With proper care, the dwarf Doberman will always be a handsome man with a shiny coat ready for exhibitions. The dog loves long walks, but sometimes you can do with a short walk. We can say that this dog is not picky about food. The basics of nutrition are also applicable to the pinscher.

Sooner or later you will have to choose a costume for a girl for the New Year if you are raising a daughter. If your family prepares for the holidays in advance, then schools and kindergartens begin to do it even earlier. And no m...

How to choose an enameled teapot and do I need to take care of it?

It is very difficult to imagine a person who would not like hot drinks. Even those who do not much like the taste of tea and coffee, at least once a day drink a cup of one of these elixirs of cheerfulness and good mood. In order t...

Interesting and fun contests on anniversaries

What kind of holiday can do without jokes? Harmless funny contests at anniversaries will create a relaxed friendly atmosphere of joy and laughter, good humor and high spirits. These are fun outdoor games, and funny song tunes, and...

The drug Gamavit for cats: instructions for use

If you want your furry pet to always look healthy and feel good, then this article is for you. After all, the story will be about a unique medicine for cats, which has helped out many caring owners. Gamavit is a Russian drug that ...

Educational work with parents in the second younger group

Most often among the parents talking on the playground, you hear similar phrases: "And you send your child to kindergarten and untie your hands!" Alas, but most parents believe that their obligations end with the admission of a pr...

Dolls and toy horses also fit harmoniously into the world of girls, like hairpins, rings, bows and ribbons. These are not only leisure items, but also a visual aid through which the girl develops character and behavior. It is wome...