For the world's most famous “business cards" of Russia are the Kremlin, Red square and St. Basil's Cathedral in Moscow. The latter has yet other names, the most popular of which is the Cathedral of the intercession on the Moat. 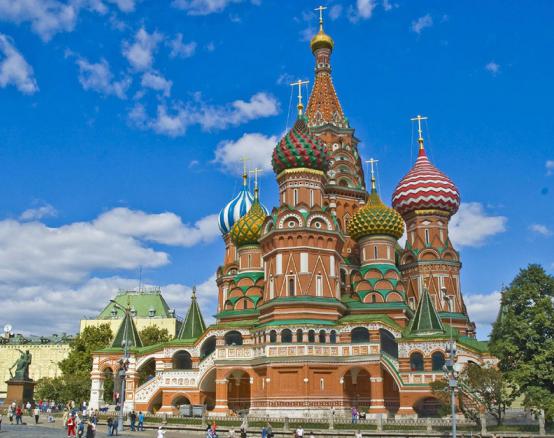 St. Basil Cathedral celebrated its 450th anniversary 02.07.2011 This unique building was erected on the red square. Amazing in its beauty temple is a complex of churches, United by a common base. Even those who know nothing about the architecture of Russia, will recognize the Church of Basil the blessed. The Cathedral has a unique trait – all its colorful domes are different from each other.

In the main (Pokrovskaya) Church is the iconostasis, which was moved from the destroyed in 1770 the Kremlin Church of the Wonderworkers of Chernigov. In the basement of the Church of the Intercession of the mother of God are the most valuable icons of the Church, the most ancient of them — the icon of St. Basil the blessed (XVI C.), written specially for this Church. Immediately exhibited icons of the XVII century: the virgin of the Sign and the Holy virgin. The first copies the image located on the East side of the facade of the Church.

The history of the temple 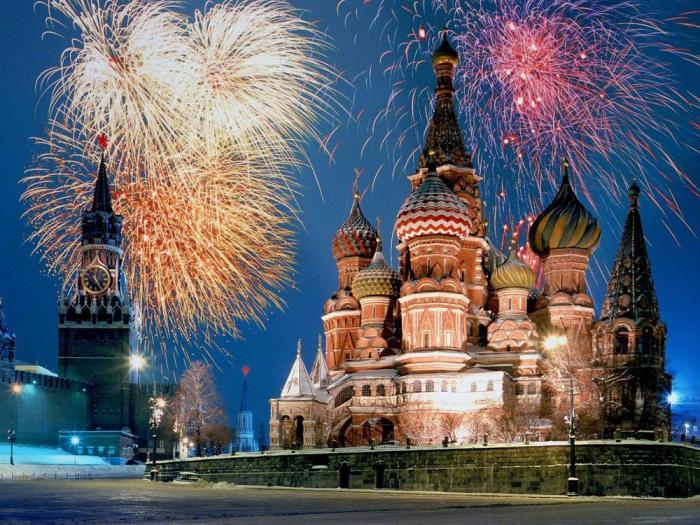 St Basil's Cathedral, the history of the construction which has acquired a number of myths and legends, built on the orders of the first Tsar of Russia Ivan the terrible. He was dedicated to the important event, namely – the victory over the Kazan khanate. Unfortunately for historians, the names of the architects who created this fantastic masterpiece has not survived. There are many versions as to who worked on the construction of the temple, but it is not established, who created the St. Basil's Cathedral. Moscow was the main city of Russia, so the king gathered in the capital's best craftsmen. According to one tradition the main architect was Postnik Yakovlev from Pskov, nicknamed Barma. Another version completely contradicts this. Many believe that Barma and Postnik – different masters. More confusion occurs on the third version, which says that St. Basil's Cathedral in Moscow was built by the Italian architect. But the most popular legend about this temple is the one which refers to the blindness of the architects who created this masterpiece, that they are unable to repeat its creation. 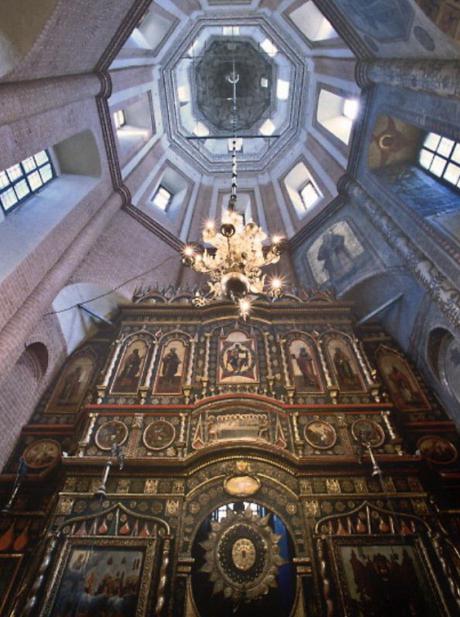 Amazingly, despite the fact that the main Church this Church was dedicated to the Holy virgin, all over the world it is known as St. Basil's Cathedral. In Moscow there was always a lot of fools (blessed “the people of God”), but the name of one of them forever etched in the history of Russia. Mad Basil lived on the street and even in the winter walking around half-naked. All his body was covered with chains, which represent the iron chains with big crosses. This man was much respected in Moscow. Even the king treated him with uncharacteristic reverence. Basil was revered by the townspeople as a miracle worker. He died in 1552, and in 1588 over the grave was erected a Church. It is this building gave the common name given to the temple.

Almost everyone who visited Moscow, know that the main symbol of Russia is Red square. St. Basil's Cathedral is one of the most honorable places in the whole complex of buildings and monuments located on it. The temple is crowned with 10 magnificent domes. Around the main (chief) of the Church, called the virgin Mary, symmetrically located 8 others. They are constructed in the form of octagonal star. All of these churches symbolize falling on days of the capture of the Kazan khanate religious holidays.

The Domes of St. Basil's Cathedral and bell tower

Eight 8 churches crowned with onion domes. The main (Central) structure completed "tent", above which rises the little "cupola". The tenth dome was built over the Church bell tower. The amazing thing is that all the domes are completely different from each other in texture and color. 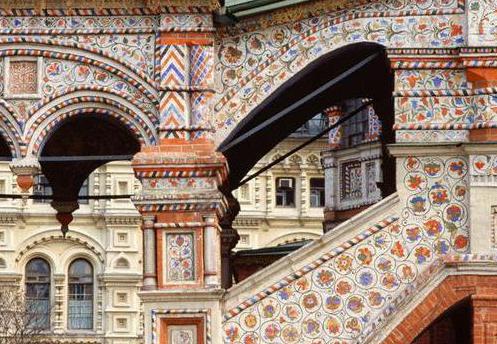 Modern bell tower was erected on the site of the old belfry, which is completely deteriorated in the XVII century It was built in 1680 At the base of the bell tower is high and massive square on which is erected an octagon. It has an outdoor area, fenced 8 posts. They all are connected by arched openings. The top platform is crowned by a high octagonal tentedges which are decorated with tiles of different colors (white, blue, yellow, brown). Its sides are covered with green scalloped tile. At the top of the tent is a bulbous cupola topped with an octagonal cross. Inside the venue on the wooden beams to hang the bells, which were cast in the XVII-XIX centuries. 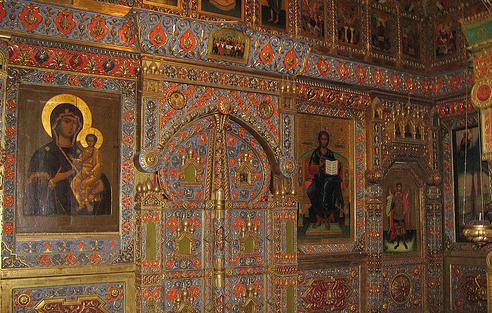 the Nine churches of St. Basil's Cathedral are connected by a common base and a pass gallery. Its feature is a whimsical painting, the main motif of which are floral designs. The unique style of the Church combines the traditions of both European and Russian architecture of the Renaissance. A distinctive feature of the Cathedral are arched openings. The height of the temple (higher dome) is 65 m. the names of the churches Cathedral of St. Nicholas, the Trinity, the Martyrs Adrian and Natalia, the Entry into Jerusalem, John the merciful, Barlaam of Khutyn, Alexander Svirsky, Grigory Armenian, Protection of the Mother of God.

Another feature of the temple is that it has no basement. The extremely durable the basement walls (reaches a thickness of 3 m). The height of each of the premises is approximately 6.5 m. the Whole structure of the Northern part of the temple is unique, as long torispherical arch basement has no support posts. The walls of the building “cut” so-called ‘produhi”, which represent narrow openings. They provide in the Church a special microclimate. For many years the premises of the basement was not available to parishioners. Niche-caches were used as storage and closed doors, the presence of which now showed only preserved on the walls of the loop. It is believed that before the end of the XVI century. they had the Royal Treasury.

Gradual transformation of the Cathedral 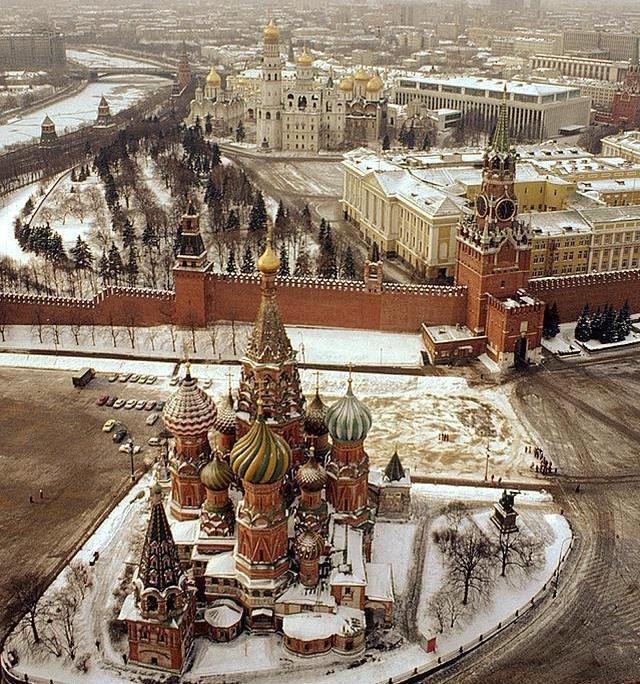 Only at the end of the XVI century, the Church appeared the curly head, which replaced the original ceiling, burned in another fire. This Orthodox Cathedral until the seventeenth century it was called Trinity, as the first wooden Church, which was located on this place was built in honor of the Holy Trinity. Originally this building had a more austere appearance, because it was built of stone and brick. Only in the XVII century the domes were decorated with ceramic tiles. At the same time to the temple were built on asymmetric buildings. Then came the tents over porches and intricate paintings on the walls and ceiling. In the same period on the walls and ceiling appeared elegant painting. In 1931, before the temple was erected a monument to Minin and Pozharsky. Today St. Basil's Cathedral is under the joint authority of the Russian Orthodox Church and the Historical Museum of Moscow. This building is a cultural heritage of Russia. The beauty and uniqueness of this temple is praised all over the world. St. Basil's Cathedral in Moscow, classified as world heritage by UNESCO.

The Value of the Pokrovsky Cathedral in the USSR 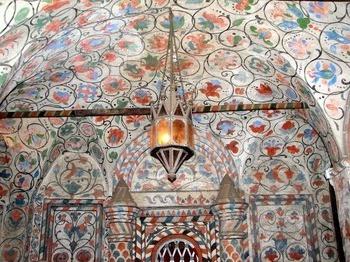 Despite the persecutions of the Soviet power against religion and the destruction of a huge number of churches, St. Basil's Cathedral in Moscow in 1918 were taken under state protection as a cultural monument of world importance. At this time all the efforts of the authorities were aimed at the creation of a Museum. The first caretaker of the Church was Archpriest Ioann Kuznetsov. He almost alone took care of the renovation of the building, although his condition was just terrible. In 1923 the Cathedral is home to historical and architectural Museum “Pokrovsky Cathedral». Already in 1928 he became one of the branches of the State historical Museum. In 1929, he was acquitted of all the bells and worship was forbidden. Despite the fact that the Church for nearly a hundred years, constantly restaurerede, his exposition was closed only once – in the years of the great Patriotic war.

After the collapse of the Soviet Union, St Basil's Cathedral transferred to the joint use of the Russian Orthodox Church and the State historical Museum. 15.08.1997 with in the temple were resumed festive and Sunday services. Since 2011, open to the public previously inaccessible chapels, where a new exposure.

the Ordinary objects that we use every day, too flash in the night visions. Let's see what dream comb. It turns out that this thing can tell a lot inquisitive mind. It is only a little to speculate. Let's get acquainted with the i...

the Capital city of Kiev can not but admire its historical relics and architectural monuments, some of which are already more than 1000 years. One of such shrines is St. Elijah's Church, built in honor of Elijah the prophet and su...

Mars is a planet is a complex, controversial and dangerous. Below we consider how it affects the destiny of man in combination with other celestial bodies. Always the big questions and disputes creates a connection the Mars-Mars. ...