National dress — is an important way of self-identification of people. It reflects peculiarities of thinking and character as well as in language. For the development of the suit is possible to trace changes in cultural and political life of the people, to know what aesthetic principles are valued in one nationality or another. In addition, they abound with all sorts of ornaments, and simply a pleasure and fun to explore. National costume of Italy has one feature. What — find out from this article! 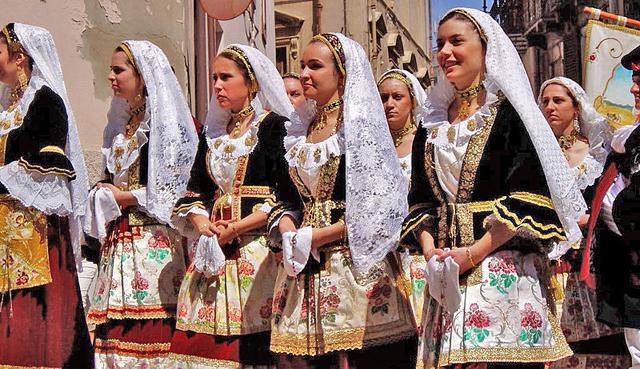 In fact, the main feature of the national costume of Italy is something that simply does not exist. The constant change of the different tribes, conquer the Italian land, not allowed him to finally take shape.

At various times it was ruled by the Etruscans, Phoenicians, Greeks, Franks, Goths, and all they have changed in casual clothes Italians. Not to mention the fact that until the mid-19th century Italy, like Germany, were separated into many kingdoms, republics and lands, which also promoted a common appearance clothes.

As well as dialect, national costume Italy, each province had its own. To this day, three border regions have a special status with the prevalence of foreign language — French, German and Slovenian. 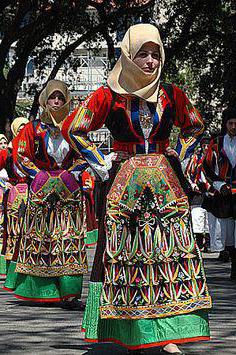 Of Course, there are some features which are common to all varieties of the Italian outfit. First of all, the brightness and variety of colors. This is not surprising — under the generous rays of the warm sun the flowers bloom not only in the fertile soil, but also on the skirts of the Italian beauties.

The Serene blue sky, the mild climate, sparkling sea gradually honed the character of the inhabitants of the Peninsula, giving the world one of the most cheerful people. All of this is absorbed and the national costume of Italy. Photos of the girls in the Calabrian traditional dress energize no worse than unrestrained joyful Italian songs.

In all costumes great importance was given to jewelry. This was also a compulsory element of Italian clothing. Married women had to wear hat and black jacket, single — a white apron, a widow — black. Male-bachelor could flaunt through the streets in a red jacket and green hat with red cords.

Considering the costume of Italy, photos of which can be seen in publications on the history of national clothes, you will notice that almost all the differences are concentrated in the area of accessories. The clothes all about the same: the women wore a long skirt with an apron, corset and white embroidered shirt. Head covered with a handkerchief. Men over a white shirt put on a jacket or vest with long sleeves. The pants often were narrow and tucked into socks. 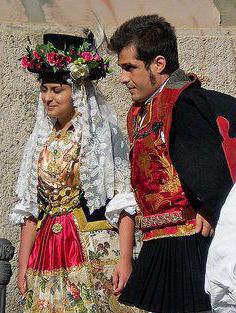 The national Italian women's wardrobe consisted of long skirts, pleated or Assembly shirts (often embroidered) with wide sleeves and bodice. Complement this outfit with an apron, neck and head scarves. All these elements can be found in all provinces and lands, differ could the length of the skirt, the colors, the embroidery, the presence or absence of lace.

For example, in the Northern lands during the middle Ages lace was very popular, decorating outfits beauties, fashion. In the lands bordering Germany, casual clothes were more restrained and miserly in the details. But at the wedding all were allowed: costumes decorated with ribbons, plaques, feathers and embroidery. 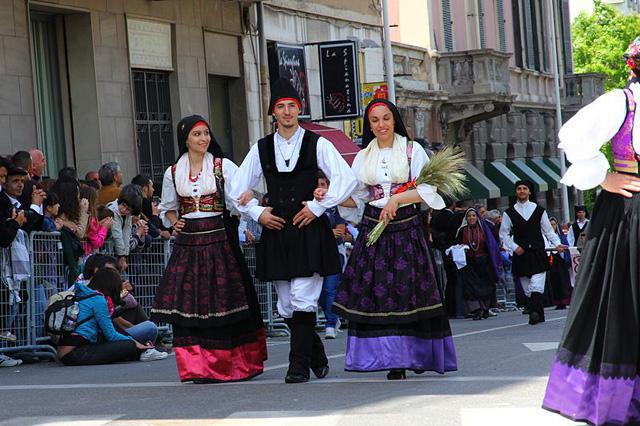 The Most diverse national costume of Italy southern provinces. The rich ladies of Sardinia, for example, wore dresses made of bright fabrics, mostly red, decorated with many rings — sometimes they could be up to seven pieces.

Women from poor layers of the population never wear more than three rings, and dresses they had practical shades of gray, with lots of pockets for convenience doing chores. The differences were noticeable and the hardware: buttons of the rich ladies was exclusively gold, the middle class could afford the silver, and the poor made them from simple metals.

The Most important part of women's wardrobe was considered a scarf or shawl covering the shoulders. Often it was the result of years of labor by skilled embroiderers and was a real work of art: delicate lace, fabrics dyed only with natural dyes. Depending on the case, which was worn a particular outfit, and its composition could be sometimes very complex: several shawls and skirts at the same time.

To this day, the national costumes are sewn by hand from the most expensive fabrics. Its value can reach up to 10 thousand euros.

National costume of Italy in Calabria took a lot from Greek and Roman garments. Women skirts were shorter and lusher in braids intertwined with ribbons, the long scarf was wrapped around the waist. In the men's closet has added another item — the Cape. Most often it was made of black or red cloth. 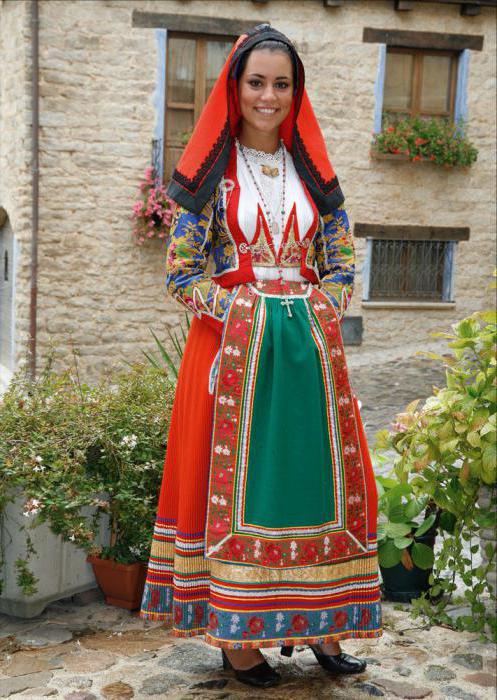 Traditional costume Italy for men was somewhat simpler than the female — at least, they didn't have to put on several pairs of pants. But it had its highlights. Usually it consisted of pants just below the knee, white shirt with simple embroidery and jackets or sleeveless jackets. The traditional headdress — burrito — were made of black or red wool.

The Pants could be of varying length, but always refueled in leg warmers. One of the mandatory elements were rages — a piece of cloth that was wrapped around the waist over trousers. The front part of the jacket is decorated with rich embroidery.

In Sardinia the male costume could include up to ten items. Instead of hats men wore a kind of cap, which hung to one side or gathered in folds at the rear, resembling a beret. 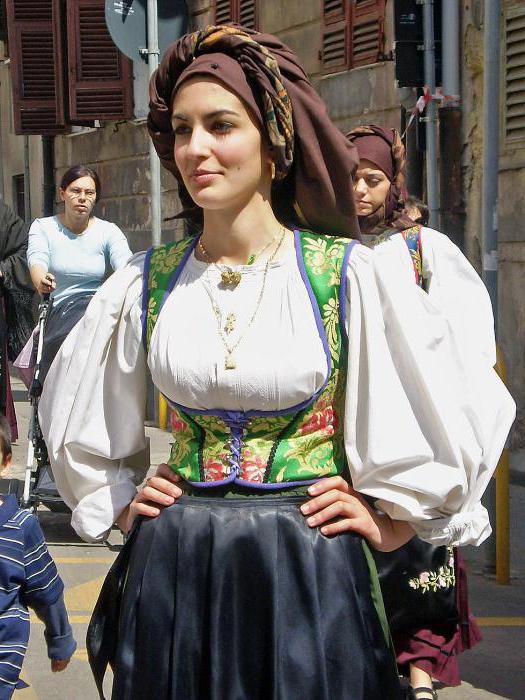 At the present time, the national dress of the Italians you meet, except that only the Catholic or national festivities. This nation really honors their traditions and gladly seizes every opportunity to remind themselves and the world about its colourful history. Adults and children wear traditional clothing and take to the streets. Especially love such holidays little fashionistas suit Italy for children is no different from the “adult” versions. Is that size. 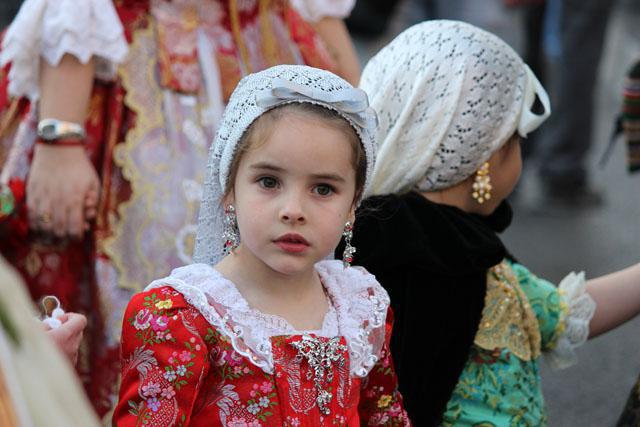 Costume Italy, a photo of which you will find in this article, has many variations. All they cover is simply impossible, as each region-even each village had its own distinctive features in the manner of dress. No wonder Italy was the birthplace of high fashion.

If you get paint on denim many people think that clothes should be discarded. Really dense material very hard to clean, especially if the enamel has penetrated deeply into the fiber structure.ink Spots on the jeans, of course, do ...

About alexandrite in the jewelry world it is known as one of the most amazing and exotic minerals. This stone is called again and the Royal gem of the elite and luxury. The main feature, which has natural alexandrite lies in its a...

Us size rings and its relationship with the European

Thinking about buying jewelry abroad (in a conventional store or on an Internet website) must be ready for some specific nuances. For example, in many countries a lot of products do not indicate in the usual grams, and in carats. ...

Bright and bold t-shirt with a cross

Fashion does not stand still, and in the last few years, many designers focus on the Gothic symbols in their models, turn to "evil" characters. On the items of clothing we often see all sorts of skulls, swords, crosses and inverte...

With the arrival of the fall season becomes acute and topical issue of choice of school dresses for girls. After all, this purchase is not for one season. Student dress should be not only beautiful, but also quite comfortable and ...

it's good to be bad! You think? Then you should hear the new fragrance from Carolina Herrera - a Good Girl. Reviews about it and excite the minds of women who have not had a chance to open the original bottle and inhaling the extr...