To Decorate your home, including decorative lighting, people have always sought.

Today, the most popular decorative led lighting, which is used in residential and public buildings, courtyards and streets. The imagination of the decorators is no limit. An example is the led fringe.

For restaurants and cafes signage was not enough. Summer sites are highlighted with natural and artificial trees with led lights.

And colored with bright colored lights holidays – this is a real extravaganza of light and colour. Garland not just for Christmas trees, but also on the Windows, roofs and walls complement the magic charm of the most magical holiday of the New year. 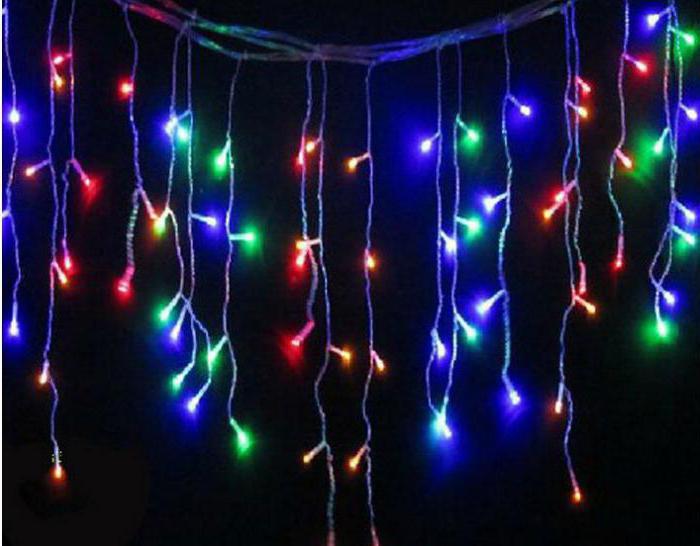 One of the most favorite scenery is a rain of light bulbs, a type of fringe which is led. He makes extraordinary façades, door and window openings, road stretches, even entire streets.

What is led fringe

This light garland, which is on a horizontal loop of fixed length, for example, 3 or 4.2 m segments arranged vertical filaments of different lengths from 0.2 to 0.9 m with LEDs. On the three-meter loop on the thread for them 2, 4, 6, 8, 6, 4, 2, and longer 2, 4, 5, 8, 5, 4, 2 PCs in the same segment. Only five and six fragments, and led one hundred and fifty and one hundred eighty-one garland respectively. The distance between the filaments and lamps - about ten centimeters.

The Main cord can be transparent, black or white, and glow white, yellow, red, green, or blue.

Power consumption in energy-saving led curtains from different manufacturers are different, but not more than 20 (3 meter) and 25 W (4.2 meters).

Can be connected in one curtain, several lights, as there may be up to ten. The result is a luminous canvas with a wavy bottom edge.

The benefits of led fringe

Sometimes you can see Shine colored lights from the roof to the porch of the big house, the fence surrounding it, the path to the house. Almost all the decorations – led fringe. Photos of these houses look from the pages of new year's eve rooms of glossy magazines. Scary how much power that can be spent on such decorative lighting. But that's the beauty of that very little! 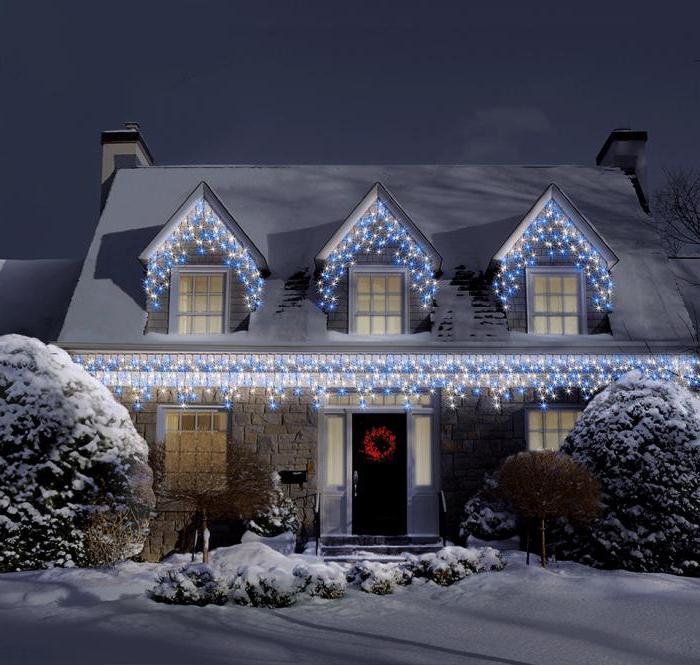 One of the main advantages of fringe led is low power consumption and consequently low costs per payment.

Another advantage is long (up to one hundred thousand hours), the lifetime of the lights.

In addition, fringe led is very easy to install, it is enough to connect to household power grids. It tolerates low temperatures and high humidity, is fireproof.

A Wide range of colors and the possibility to connect quite a number of decorations completes the list of useful properties led fringe.

Led fringe for the street should be of high moisture, to decorate the premises this factor is not important. In addition to the water-resistant protection from the street dust. In the marking of the specified fringe numbers that define protection, street garlands it is advisable to buy from the indicator IP65, in any case, not lower than IP44. 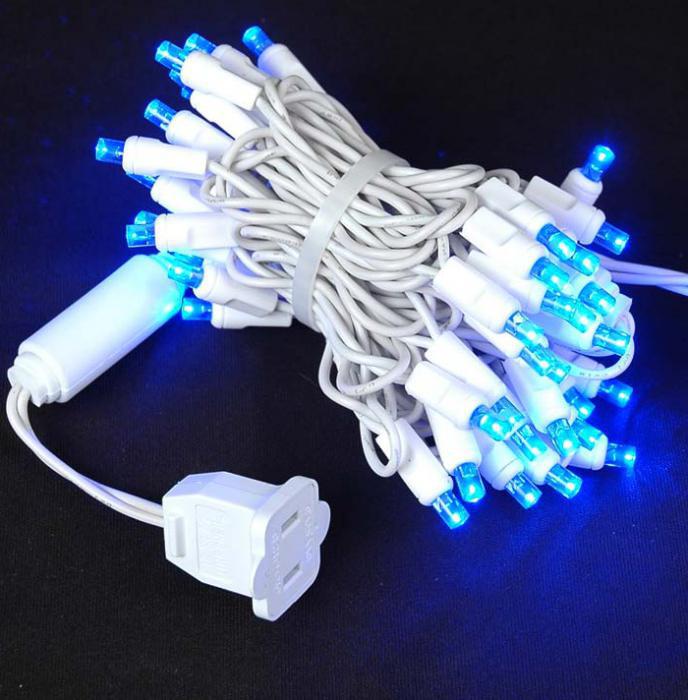 For long garlands is better to use special power supplies or transformers, step-down the voltage.

Depending on what effect is expected, you need to choose the colors and type of illumination led fringe, but don't forget about the brightness of the jewelry. Illumination can interfere with drivers on the road or neighbors at night. You can set a timer that turns off decorative lighting, for example, after eleven o'clock in the morning.

By the Way, this timer will help reduce energy costs.

It Varies by type of illumination. It can be led shimmering fringe, and in two variants: shimmer, that is lit and faded out, all diodes, or any particular, for example, one thread or one in five. The flicker effect is created by using the built in controller, that is, additional equipment purchase is not necessary. 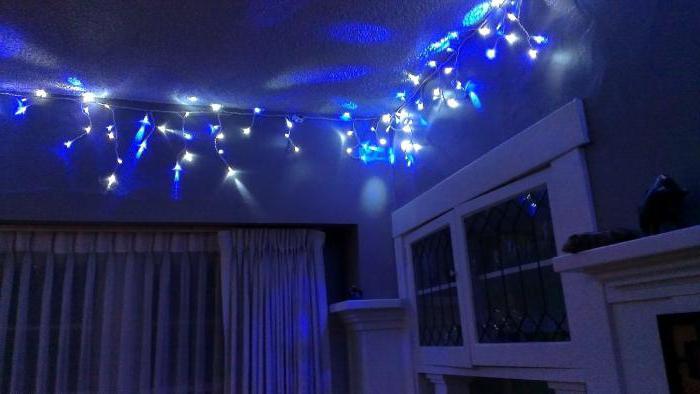 The Third type of illumination (chasing) – the diodes on the garland gently lit and then slowly extinguished – looks very advantageous in large-scale decorations, when the effect of the light falls.

Led by a fringe, shimmering for street, straight down a very bizarre and mysterious. So, if you put it on the perimeter of the roof or gazebo, decorate a visor, it will give the impressionwhat is that shimmer in the moonlight icicles.

Like any other garland, fringe, led, stretched between the pillars, decorates the streets.

Not only festive, but also looks very practical in the dark of night from lights on the staircases in the house and outside. 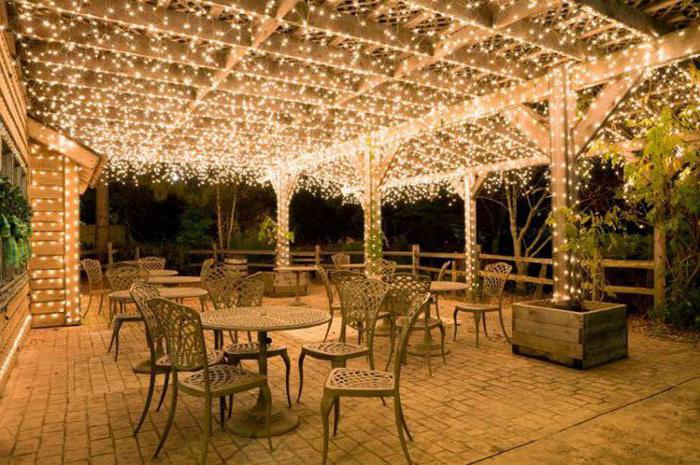 Fringe led – the decoration of streets and houses, cheap, safe, easy to install and yet striking. It provides scope for the creative imagination of professional lighting designers and ordinary Housewives who love their home and the holidays.

Car holder for smartphones – is a modern device, which allows you to mount a mobile device on the dashboard. Such accessories are in demand due to their versatility and ease of operation. What are the characteristics of the ...

Greeting mom with a newborn boy. What to give to this event?

Congratulations mom with a newborn boy is always nice and appreciated. The main thing is not how it will execute, and that the person sincerely wished the good kid and his parents.One of the most memorable days in a woman's lifech...

Batting: What is it and what is it used for

Batting – the painting used for domestic purposes as insulation. According to its characteristics, this material is very similar to wool. He's so warm and airy. Buyers who want to buy quality fabric is required to know the a...