Rather large-sized bird-eating spiders are distinguished by their bright coloring. Adults often reach a length of more than twenty centimeters. These animals are not aggressive and unpretentious in care. Therefore, an increasing number of exotic connoisseurs breed spiders at home. Females live about 15-20 years, males - three times less, dying after mating. 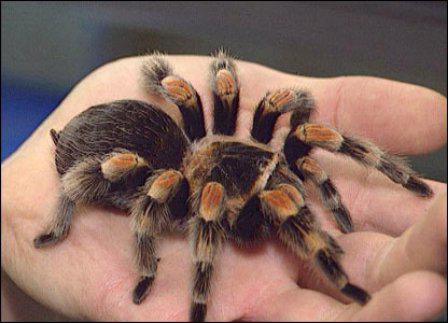 In this article we will look at the main issues concerning the care of these amazing animals.

Bird-eating spiders inhabit all continents of our planet, with the exception of Antarctica. They are most common in Africa, Oceania, Australia and South America. In Europe, individuals of this species are extremely rare in nature. A small number of them can be found in Spain, Portugal and Italy. Moreover, both wet and desert zones can be inhabited by bird-eating spiders.

According to the manner of behavior, these representatives of the arthropod class are divided into burrowing, arboreal and terrestrial. Moreover, during their existence, animals can change their way of life. Burrowing spiders dig a shelter for themselves in the ground. They use cobwebs to strengthen the soil. Ground spiders also dig shallow burrows or use ready-made shelters. 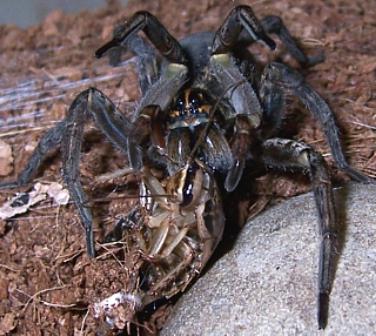 Arboreal ones live on trees, weaving a web among the dense branches of shrubs.

Animals feel great both in small and fairly spacious rooms. That is why a terrarium for a bird-eating spider can be purchased of any size. The main thing is that it exceeds twice the size of the animal. Tree spiders are best kept in a vertical terrarium, across which you need to place a thick branch so that the pet can find a secluded place for itself. For terrestrial animals, a sufficiently large layer of substrate, at least five centimeters, should be poured into the terrarium. In addition to the fact that adults crawl well, they also differ in remarkable strength. Therefore, housing for an exotic pet should be tightly closed from above with a lid. The terrarium should have a ventilation window, but not too large, so that the substrate does not dry out, as which gravel, peat, sphagnum, sawdust, lichen can be used. If there are several individuals of the same species, spiders should be kept in separate containers. This will prevent the manifestation of cannibalism. In winter, the terrarium should be heated so that the temperature in it does not fall below 25 degrees. For these purposes, you can use an infrared lamp or a thermal lining for the substrate. Since bird-eaters are mostly nocturnal, lighting in the terrarium will not be needed. Moreover, bright sunlight is even harmful to animals. The litter should be changed after each molt. And in adults – once every four months. 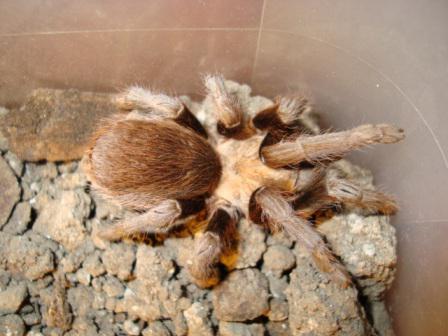 The bird-eater's dwelling can be decorated with driftwood, live moss or artificial plants. However, all parts must be well secured. For these purposes, only special glue for aquariums can be used, other means can negatively affect the health of the pet. Decorative elements with sharp edges should not be placed in the terrarium. It is not necessary to take an animal with your bare hands, since the bite of a bird-eating spider can be not only very painful, but also very toxic. In addition, the arthropod's body is covered with numerous brittle bristles. If they get on the mucous membranes or skin, they cause inflammation and itching.

What to feed a bird-eating spider?

For animal nutrition, it is best to use live insects (crickets, moths, cockroaches, etc.). The food should depend on the age of each individual. Young people need smaller food. Adult animals should be fed less often, but with larger insects. It is worth noting that on average spiders feed twice a week. Small pieces of raw meat or fish are also suitable as food.

This process, as a rule, occurs in the "lying down" position. 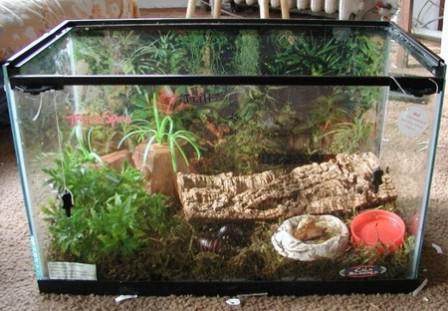 The spider turns over on its back and stays in this state for several hours. At this time, his shell slowly begins to crack on his sides. The animal carefully pulls out its limbs and gets out of the old skin. After molting, the spider noticeably increases in size and brightens. In the intervals between "skinning" arthropods very often lose protective bristles from the abdomen. It should be noted that a week or two before molting, the animal completely refuses to eat. As a rule, domestic bird-eating spiders shed about 12 times during their life.

It is possible to determine the sex of an arthropod only after molting. In this case, the spider must be at least four centimeters. To identify the gender, you should carefully examine the inside of the discarded shell with a magnifying glass. In females, you can notice a small depression in the form of a slit, and in males – paired "tongues". Adults are much easier to distinguish by gender. 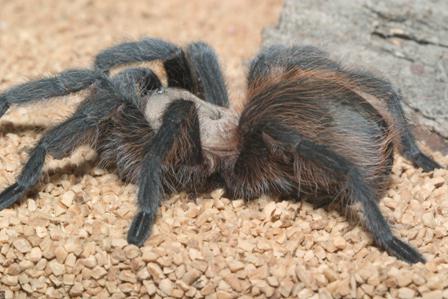 Male bird-eaters (spiders) have rather long legs. In addition, they are much slimmer than females. Sexual maturity of individuals of this species occurs by the age of five. 14 days after molting, the male begins to make a special nest, which he fills with seed. After that, the spider goes in search of a female. It is recommended to place it in a more spacious room in advance so that it has time to get used to it and settle in. A little later, a male ready for mating should also be sent there. Upon meeting, the spider begins to perform complex ritual movements. As a rule, males and females, ready to mate, use certain signals. Most often it is tapping with pedipalps, creaking, rustling. Approaching the spider, the male fills her seed pocket with his fluid. After that, it must be separated from the fertilized female as soon as possible. After one and a half to two months after mating, she will begin to reproduce offspring. But before that, the female will weave herself a large cocoon, into which she will later lay about 500 eggs. To save the offspring, it is necessary to place the container with the nest in a dark place. The recommended temperature is 24-28 degrees. For the proper development of babies, it is necessary to maintain humidity in the room. Almost all the time, the female holds the cocoon between the chelicerae, protecting it in this way. Larvae, appearing at 4-5 weeks, are in the nest until the first molt. The amazing thing is that all this time they do not eat anything. To prevent the female from eating her cubs, after the first molt they should be moved to a separate terrarium or deposited one by one in small containers. At the same time, the food for the bird-eating spider should be special. Newborn crickets or fruit flies are best suited. 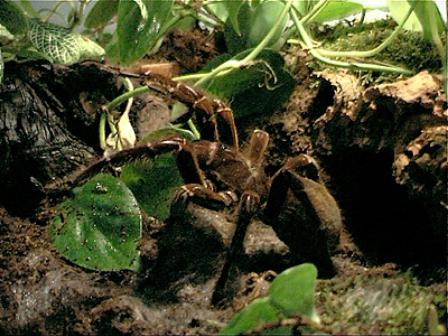 Young growth is quite slow.

After communicating with your pet, you should wash your hands well with soap. Bending over an open terrarium is strictly prohibited. All actions in the predator's dwelling must be performed using a special long tweezers. Objects that the animal has come into contact with are allowed to be touched only with gloves. It is forbidden to leave the terrarium in an open state unattended. It is very important that he is out of the reach of other pets. When contacting spiders, it should be remembered that they cannot be tamed or trained. 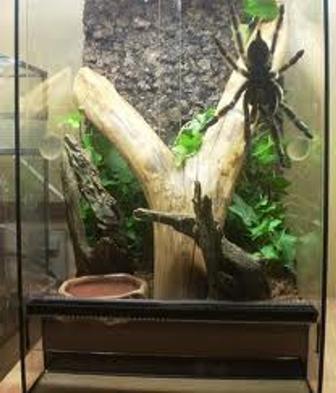 Even the most calm and sedentary bird-eater, sensing danger, can bite the owner.

There is a spider in Mexico that is more than twenty-six years old. This is a record case. As a rule, fairly large individuals from desert habitats grow slowly. At the same time, their life expectancy is much longer than that of other species. Bird-eating spiders from tropical forests grow fast, but, unfortunately, die early. It has been noticed that predators that lived in captivity live much longer than those removed from natural conditions. At the same time, they are less aggressive. Usually, male bird-eaters live no more than a year after the last molt.

When buying a spider in a pet store, pay attention to it being active. His body should be slightly raised above the substrate. A spider tucking its legs under itself or constantly lying down may turn out to be sick. A healthy animal actively reacts to touch. As a rule, the bird-eater raises its front legs, quickly runs away or, conversely, attacks. If you look closely, you can see that his fur is bristling on his stomach. In the period before molting, the animals are quite slow. They usually lie on their backs with their legs outstretched. After - bird-eaters also move with difficulty. 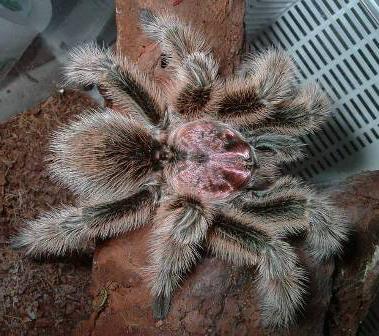 Anyway, it is not recommended to purchase a pet that is on the eve of molting. You should pay attention to the predator's abdomen. It should be rounded. Many arthropods, inhabitants of tropical forests, have a shrunken abdomen when dehydrated. Such bird-eaters should not be purchased. Broken limbs can grow in a spider after a few molts. This is not a serious defect. Nevertheless, it is better not to buy a bird-eater with open wounds on his legs. After all, it can be infected with a fungus or other infections. If, by purchasing this exotic animal, you are pursuing exclusively decorative purposes, then you should give preference to females. They have a longer life expectancy. It is not worth buying very large individuals, as they may be of advanced age.

Comic contests for high school students for the autumn ball

In order for the festive evening to be held at the highest level, it is necessary to think over and prepare a scenario in which there will definitely be fun games, ironic contests and comic competitions. And what wise experts will...

Fun Time children's clothing is a great choice for a kid

With the arrival of the next season, every parent begins to think that it's time to update their child's wardrobe. Sorting through things, mom may find that almost everything has become too little, you need to buy new elements of ...

Usually parents scare young children who do not show diligence in their studies with the fate of a janitor in the future. However, every professional is important for the country, even if he is a doctor, even a shoemaker.Professio...