The Frog lake is the largest representative of its species. Habitat it is quite wide, so the shape color depending on the site changes. Populations are usually numerous.

It has an elongated body with a slightly pointed snout. Color top can be different. It usually green, but sometimes they are grey and brown frogs. Whole body covered with large dark spots, uneven shapes.

The majority of the representatives of this species along the spine and head is clearly distinguishable bright band with small splashes. 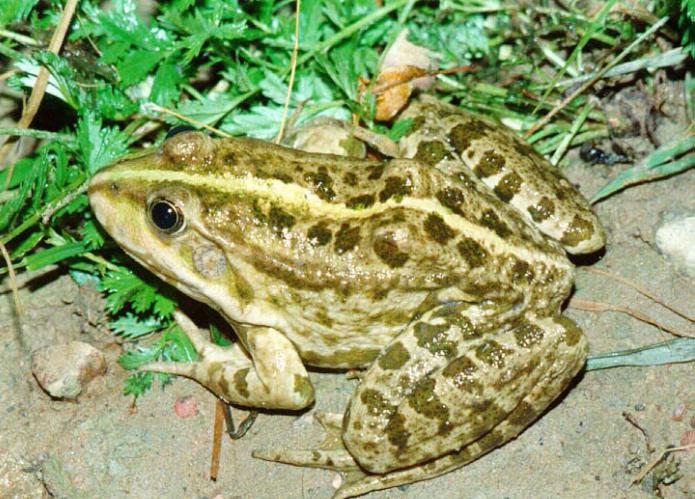 The Bottom of the body has a yellowish or dirty white color. Often present and almost black spots. Gold eyes. In the natural environment lives up to 10 years. Lake frog grows up to 17 cm in length. It should be noted that males slightly smaller than females, but they have resonators. In the daytime periodically comes to water to increase the moisture of the skin at night while reducing the temperature the frog is not in danger of drying the surface of the body.

The Amphibian's preference for such natural areas as mixed and deciduous forests, steppe, in the southern part of it can be found in the deserts, in the North inhabits some areas of the taiga. Thus, the area of its habitat is Central and southern Europe, Asia, Kazakhstan, Russia, the Caucasus, Iran, Northern Africa.

Lake Frog lives in ponds with fresh water (depth 20 cm). Inhabits ponds, the estuary and the banks of rivers and lakes. You can see it and within the city limits at the concrete banks of ponds, thickets of willows and reeds. The presence of a person nearby is quiet. 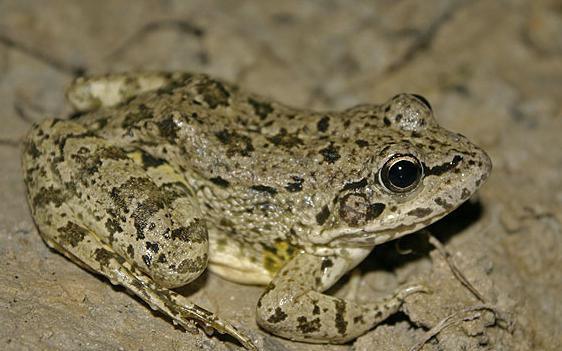 Even the most extreme conditions can adapt frog lake. Habitat individuals of this species can therefore be very different, they are able to survive in highly polluted areas, however, in this case of potential anomalies in development.

Easily and quickly also inhabits artificial ponds and reservoirs. During the drying of water bodies can migrate to new habitat, overcoming up to 12 km.

Frog lake is a thermophilic species. She is active around the clock in temperatures from +8 to +40 °C. In a particularly hot hours hiding in the shade of plants.

The Day the animal spends both on shore and in the water. On land basking in the sun, while being in a stationary state. However, possessing excellent hearing and vision, at the slightest danger jumps into the water. Here the frog finds a safe place and hides, often simply clogging in the mud. In water it can stay long enough. And only after will be convinced that there is no danger, returned to his former place.

Being a good swimmer, she still avoids fast currents, although it is not terrible even wave. 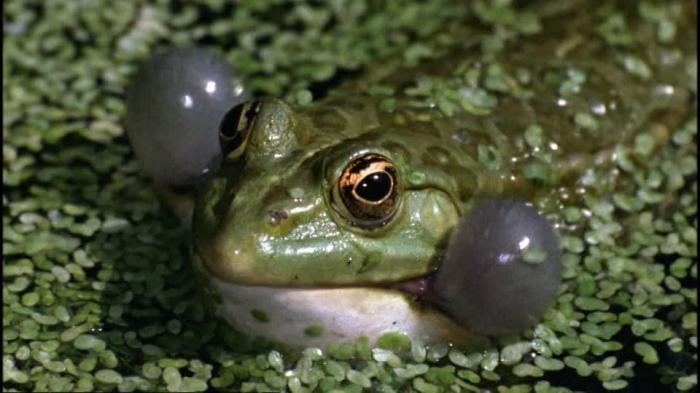 Lifestyle of lake frog allows her to stay to spend the winter in the same pond. Sometimes it moves in search of deeper places or springs. Where water does not freeze all year round, the frog remains active constantly. Hibernation lasts about 230 days, all this time she is in the mud or on the bottom. Rises up to the middle of may, when the water warms up. In the case of frost killed a lot of frogs.

In favorable habitat areas, the number of amphibians is simply amazing. Often frogs sitting on the Bank of the great flocks, and the surface of the pond is teeming with numerous protruding muzzles.

What is the marsh frog? It all depends on age, habitat, sex and time of year. They feed both on land and in water.

The hunting Ground takes place just a few metres from the shore. This amphibian is a real predator. Thanks to the inspiring dimensions, its potential you may catch a small lizard and a snake, mouse, chick and frog even smaller.

In water lunch become newts, small fish and tadpoles of their own. In the main diet consists of invertebrates - crustaceans, insects, molluscs, centipedes and worms.

Marsh frog can catch their prey on the fly. This is usually butterflies, flies, dragonflies. While hunting she is actively using his tongue, throwing it a few inches forward. The sticky slime helps to hold moving prey. If the victim is at a great distance, amphibian creeping up to her cautiously. The frog is also very accurately able to jump, landing in the right place.

Puberty female is three years. Unlike other amphibians, breeding takes place much later in time. The frog waits until the water temperature rises to +18 °C. this is Usually the end of may or June. The eggs are laid in the same pond in which it lives, special migrations for this purpose she was doing.

Since the advent of the first frogs after wintering before spawning takes place from one week to one month. 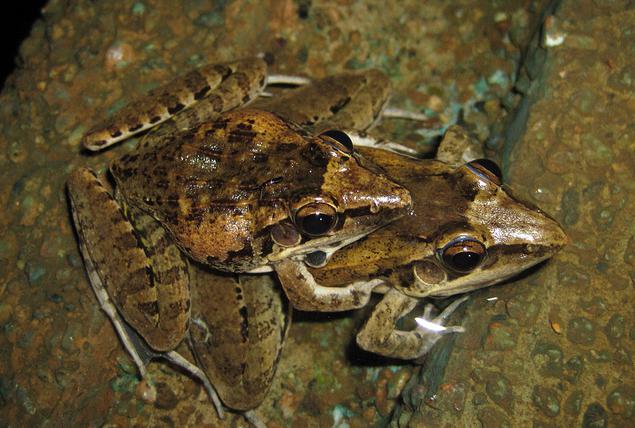 For breeding, they gather in large groups. Males in this period is particularly vociferous and very active. When croaking at them in the corners of the mouth swell resonators. Also during the breeding season the males have the front foot on the first finger there are seals – a marriage of corn.

“songs” attract the attention of females. Before leaving the calf mating. However, fertilization is external. It happens in almost all amphibians, is not an exception and frog lake.

The Description of this process is the following: the male embraces the female so that his front paws are on his chest. Thus there is a simultaneous inflorescence emerge of sperm and eggs into the water, which contributes to the fertilization of more eggs. Sometimes one female from may “hold” two to three males.

The breeding Period is one month. One female can lay up to 6000 eggs.

3-15 days after fertilization, tadpoles emerge. Immediately after birth they spread out throughout the pond. By day they are more active at night, hiding on the bottom. Only after 2-3 months they reach a length of 9 cm, However, after metamorphosis, young frogs only 1.5-2.5 cm. 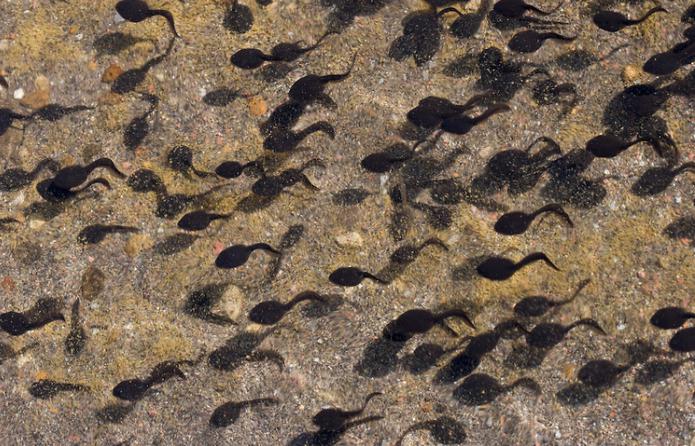 The favorable water temperature + 20-28°C, at 5-6°C, the stop of development, and at +1-2 °C, they die. Not all tadpoles will develop into the adult marsh frog. Most of them become food of predatory fishes and various birds.