English physicist Michael Faraday, who grew up in a poor family, became one of the greatest scientists in the history of mankind. His outstanding achievements have been made at a time when science was a lot of people born in privileged families. Named in his honor the unit of electrical capacitance - the Farad.

Michael Faraday born 22 September 1791 in the British capital London. He was the third child of James and Margaret Faraday. His father was a blacksmith who had a weak health. Before marriage his mother worked as a maid. The family lived in poverty.

To 13 years, Michael attended the local school, where he received his primary education. To help the family, he began working as a messenger in a bookstore. The zeal of the boy impressed his employer. A year later he was promoted to apprentice bookbinder. 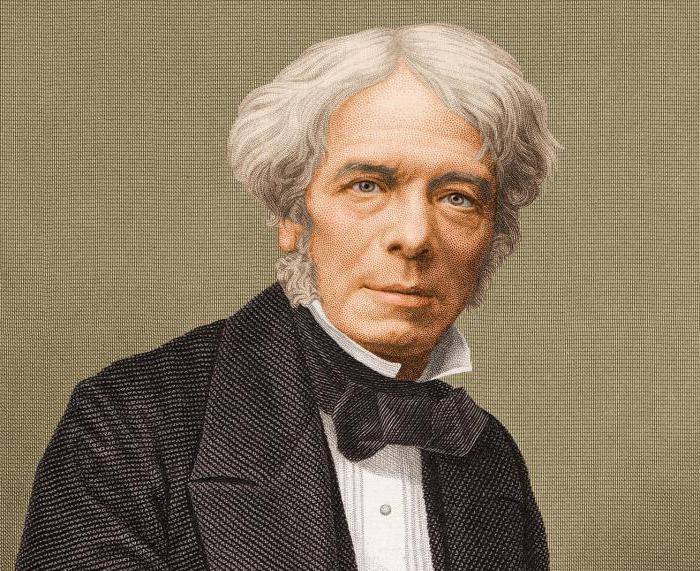 Michael Faraday wanted to know more about the world; it was not limited to the restoration of books. After a hard daily work, he spent his free time reading books that he bound.

Gradually he found that he was drawn to science. He especially liked two books:

He was so fascinated that he began to spend part of their meagre earnings on chemicals and equipment, to confirm the truth of what was read.

Expanding their scientific knowledge, he heard that the famous scientist John Tatum was going to give a series of public lectures on natural philosophy (physics). For attending the lectures had to pay one shilling – too much for Michael Faraday. His elder brother, a blacksmith, impressed by the growing devotion of his brother in science, gave him the necessary amount. 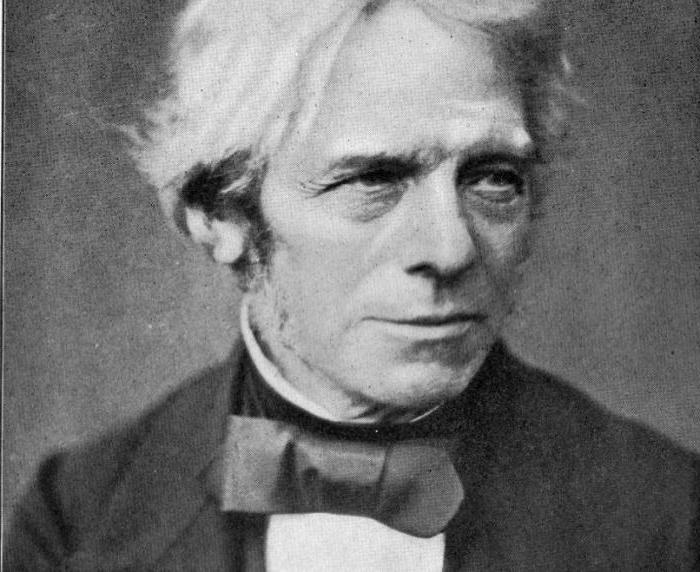 Faraday made another step to science, when William Dance, a customer of the bookstore, asked Michael if he had any desire to get tickets to lectures at the Royal institution.

Lecturer, sir Humphrey Davy, was one of the most famous scientists of the time. Faraday jumped at the chance and visited four lectures on one of the most recent issues of chemistry – the determination of acidity. He watched the experiments conducted by Davy's lectures.

It was a world in which he would like to live. Faraday took notes and then made so many additions to the notes that produced a 300-page manuscript, which he bound and sent to Davy in gratitude.

At this time in the back yard of the bookstore Michael began to conduct more sophisticated experiments to create an electric battery out of copper coins and zinc discs separated by moist salty paper. He used it for the decomposition of chemicals, such as magnesium sulfate. In this area of chemistry Humphrey Davy was a pioneer.

In October 1812, Faraday's apprenticeship ended, and he began working as a bookbinder for another employer, whom he found unpleasant.

There would be No happiness, Yes the misfortune has helped

And here was happy to Faraday case. The result of a failed experiment of Humphrey Davy was wounded: that temporarily affected his ability to write. Michael was able in a few days to keep records for Davy, impressed by the book, which he sent him.

When the brief period of work assistant is over, Faraday was a scientist sent a note asking me to hire him as his assistant. Shortly thereafter, one of the technicians Davie was fired for misconduct, and Humphrey asked Michael, would he take the vacant place.

Did he wish to work at the Royal institution with one of the most famous scientists in the world? It was a rhetorical question. 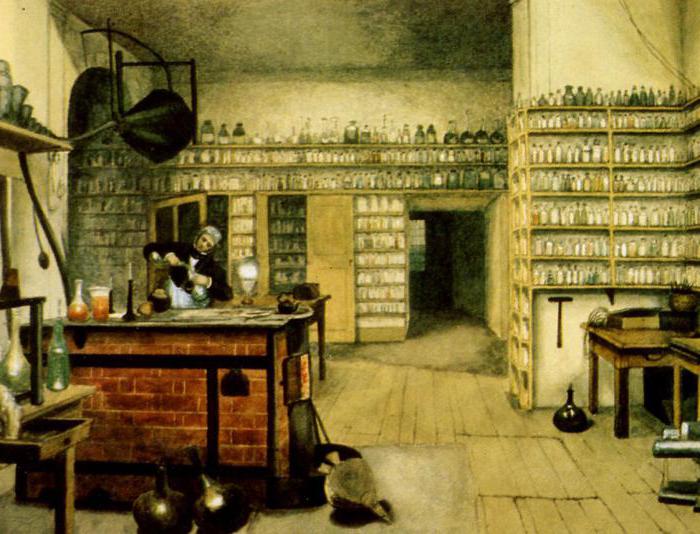 Career at the Royal Institute

He is well paid and committed to stay the room in the attic of the Royal institution. Michael was very happy, and his connection with this institution is no longer interrupted during the 54 years in which he managed to become Professor of chemistry.

Faraday was the preparation of the equipment for the experiments and lectures at the Royal institution. At first he dealt with the trichloride of nitrogen, the explosive that injured Davey. Michael, too, when another explosion briefly lost consciousness, and when Humphrey got injured again, experiments with this compound were discontinued.

After 7 months of work at the Royal institution, Davy took Faraday on a tour of Europe that lasted 18 months. During this time Michael was able to meet great scholars such as Andre-Marie Ampere in Paris and Alessandro Volta in Milan. In a sense, the tour has replaced his University education – Faraday learned much during this time.

Much of the tour, however, he was unhappy, because in addition to the scientific and secretarial work were supposed to serve Davy and his wife. Wife of the scientist did not consider Faraday as an equal because of its origin.

Back in London, everything fell into place. The Royal Institute has renewed the contract of Michael and increased his remuneration. Davy even started to mention his help in scientific work.

In 1816, at the age of 24 Faraday delivered his first lecture on the properties of matter. It was held at the City philosophical society. Then in “a Quarterly scientific journal” he published his first scientific paper on the analysis of calcium hydroxide.

In 1821 at the age of 29, Faraday was promoted to head of the farm and the laboratory of the Royal Institute. In the same year he married Sarah Barnard. Michael with his wife lived in the Institute for most of the next 46 years, not in the attic, and a room that once occupied by Humphrey Davy.

In 1824 biography of Faraday (physics) was marked by his election to membership of the Royal society. It was a recognition that he was a remarkable scientist.

In 1825, a physicist Faraday became Director of the laboratory.

In 1833, he became fuller Professor of chemistry in the Royal institution of great Britain. Faraday held this position until the end of his life. 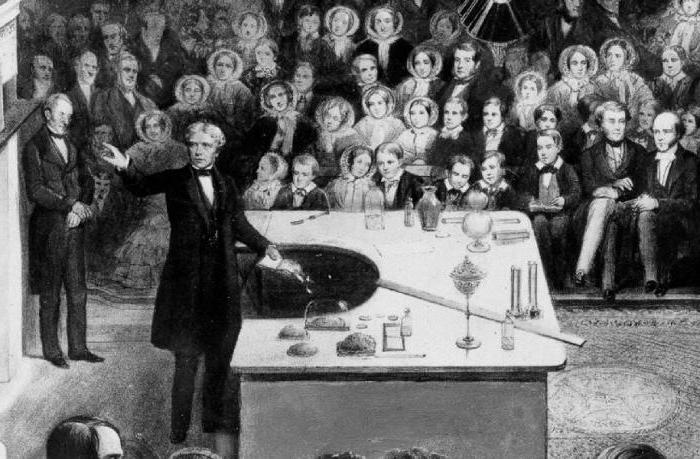 To describe the discoveries of Faraday in physics will require more than one book. Not casually albert Einstein in his office kept the pictures only to three scientists: Isaac Newton, James Maxwell and Michael Faraday.

Oddly enough, although during the life of the scientist began to use the word "physicist", he himself didn't like it, and he always called himself a philosopher. Faraday was a man marching to discoveries through experiments, and he was known for having never abandoned the ideas that came from scientific intuition.

If he thought that idea was worth it, he continued the experiments, in spite of many failures, until reaching the expected or have not yet been convinced that mother nature proved him wrong that happened very rarely.

So what discovered Faraday in physics? Here are some of his most notable achievements.

1821: the discovery of electromagnetic rotation

It was a harbinger of what, ultimately, led to the creation of the electric motor. The discovery was based on the theory of Oersted on the magnetic properties of a wire through which electric current flows. 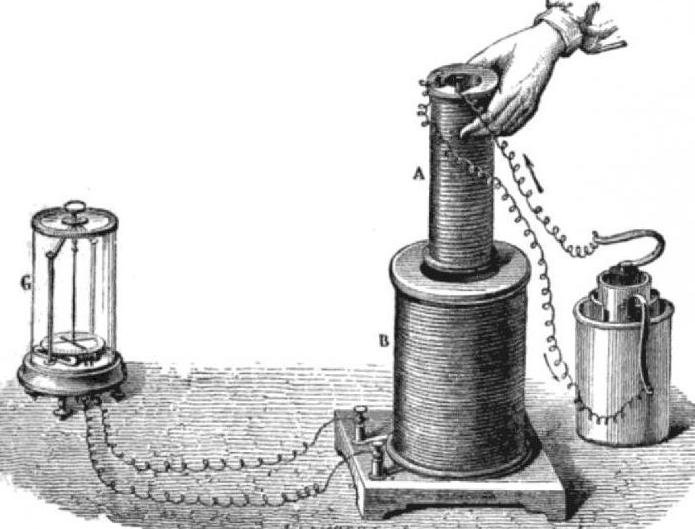 In 1802, John Dalton suggested that all gases can be liquefied under low temperature or high pressure. Physicist Faraday proved it empirically. He first turned the chlorine and the ammonia in the liquid.

Liquid ammonia was also interesting that, as noted by Michael Faraday, the physicist of process of evaporation caused the cooling. The principle of cooling by artificial evaporation has been publicly demonstrated by William Cullen in Edinburgh in 1756 Scientist with a pump reduced the pressure in the flask with ether, which caused its rapid evaporation. This caused a cooling, and on the outside of the flask from moisture in the air formed ice.

The Importance of the discoveries of Faraday was that the mechanical pumps could turn gas into liquid at room temperature. The liquid is then evaporated, cooling all around, the resulting gas could be collected and with the help of the pump is compressed into a liquid again, repeating the cycle. This is how modern refrigerators and freezers.

In 1862, at the world London exhibition Ferdinand carré, demonstrated the world's first commercial machine for the production of ice. In the car as the coolant used ammonia, and it produces ice at a rate of 200 kg per hour.

Historically, benzene has become one of the most important substances in chemistry, as in a practical sense, i.e. it is used in the creation of new materials and theoretical – for understanding chemical bonding. Scientist discovered benzene in the oily residues of the production of gas for lighting in London.