Application in the kindergarten preparatory group: ideas and a master class

Children 6-7 years old are quite good at cutting out colored paper with scissors. Therefore, the application in the preparatory group is already more complex than, for example, in the junior, middle. Children can make birds, snowmen, and fruits out of colored paper or fabric and carefully stick them on a white sheet of cardboard. 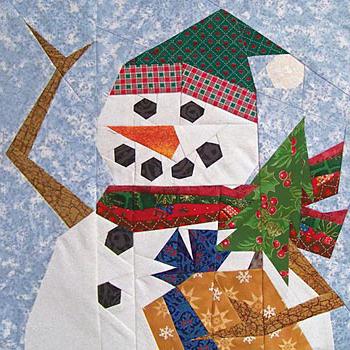 What skills will this type of creativity instill in the child?

< p>The application in the preparatory group is designed to develop aesthetic perception, to continue to introduce children to the objects that surround them. They not only know what birds, vegetables, and fruits look like, but they can also recreate it all on paper.

At the same time, the child develops color perception, as he selects the most accurate shades. Application in the preparatory group helps to activate independence, creative activity.

The child will certainly like the idea of making a bird, for example, an owl. Small parts are attached to its streamlined body, so this work should not cause much difficulty. 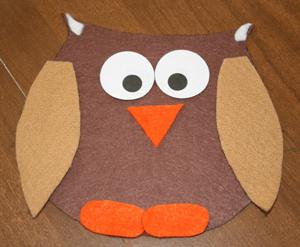 After the table is covered with paper (so as not to get it dirty), put glue, scissors with rounded ends, colored cardboard and a pencil next to it. With the latter, the child will draw the necessary details on the back of the cardboard. If he can't handle this task the first time, help him.

Turn a brown sheet of cardboard or paper of this color on the reverse side, draw a circle, and on its top - a slightly concave line. It will become the upper part of the owl's head. Very soon, the first large detail will turn out to be an application, the birds may well be of this shape.

Next, 2 circles are cut out of white paper, they need to be glued to the top of the owl's head. Then there are two smaller circles on them – these are the pupils, they will be black. Under the eyes, place the bird's beak, cut out in the form of a triangle of orange paper. From the same material, make two oval shapes, glue them horizontally at the bottom of the torso. These are paws.

As you draw and carve the details with your child, tell them what shape they are. Then the son and daughter will learn the type and name of the figures well. Say that the wings will be an elongated oval. Cut off its upper part, and sharpen the lower part. Glue the wings on both sides of the torso. It remains to make small owl ears, and now a fun application is ready. Birds can be different – with a round head, an oval body and thin legs. Tell the preschooler about this, too. 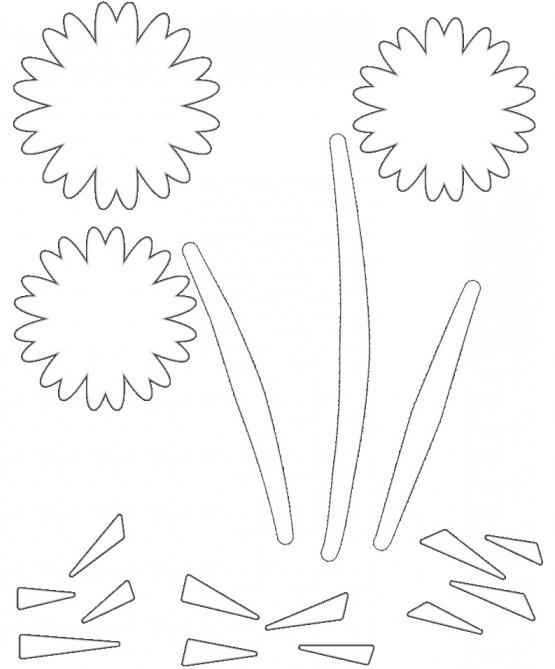 If you have a printer, you can use it to make an application. To do this, the desired drawing is located on the computer, detailed, reduced or increased to the required size. Then the child will cut out the fragments with scissors.

Colorful flowers in the photo are made just in this way. Ready-made templates should be attached to the back of colored paper and outlined. If the part moves, tell the child that it needs to be pressed down with your fingers to the paper. 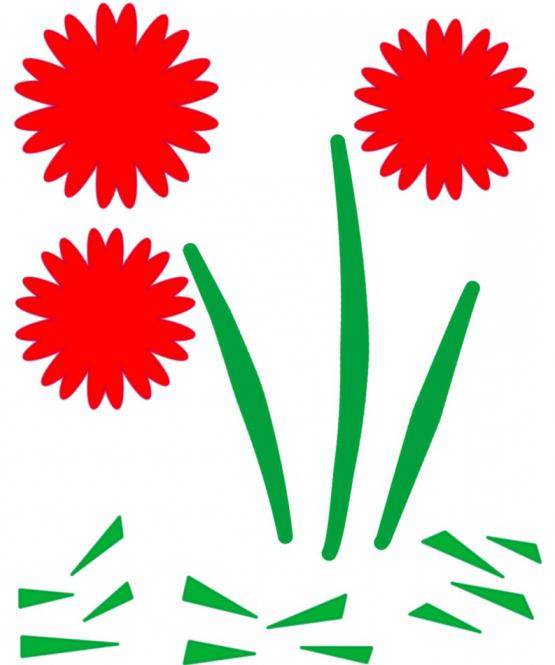 Then you need to remove the template and cut along the contours. In this example, the flowers are made of red paper, and the stems and leaves are made of green paper. Let the child show his imagination by putting on the details himself. One flower in the center may be taller than the others and more leafy. Thus, you can hold a lesson in the preparatory group, the application "Flowers" is more suitable for summer themes. If the task is to be done on an autumn theme, use another idea.

Application in the preparatory group for the autumn theme will help to show young talents. Let them make a fun full-bodied pumpkin. It can be made not only from paper, but also from fabric.

To do this, a square is first cut out of the orange paper, after which its corners are rounded. You can make a pumpkin in the form of a circle or draw a wavy line at the bottom, consisting of three ridges.

The base is glued to the paper. Two small eyes can be placed symmetrically or at different heights, then the look of the magic pumpkin will be even more fun. For the mouth, draw two parallel semicircles on dark paper, cut out. It turns out a smiling mouth. You can draw it on an orange base with a brown pencil. 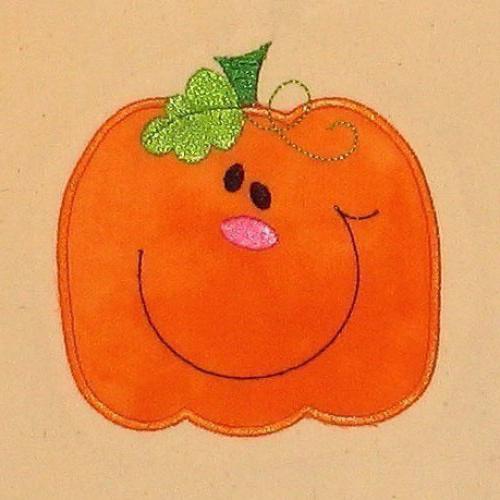 It remains to cut and glue the final detail – the tail on the top of the green paper, so the application is ready.

The preparatory group. "Autumn»: what else can be done on this topic?

Of course, this time of year is famous for mushrooms. Their children will also do it with pleasure. It is better if they recreate the whole picture on the canvas, where they will capture a clearing, a corner of the forest. The fungus is very easy to make. Its white leg is an oval, and the hat looks like an umbrella or a semicircle. It can be yellow, red, or brown. At this age, children can learn the names of edible mushrooms, the application will help them.

If the legs of the mushrooms are white, then you can take a canvas of blue, light blue color for the picture. At the top of it, white wavy clouds will float and the yellow sun will shine.

You can add a touch of originality to the picture. Cut and glue the base for the tree-the trunk and twigs. On a walk, collect small leaves, dry or iron them, let the child stick them on the tree. You can make a bird in the nest by gluing a real feather. If a preschooler outlines his palm, he will turn it into a bird. The thumb will become the head and beak, and the rest will become feathers. All that remains is to cut and glue only the long, thin legs and place the bird on or near the tree.

In the preparatory group, children know the names of many fruits, and how they look. Continuing the autumn theme, you can offer the children to cut out of colored paper and paste on the base the ones that they most like.

A few grapes are cut out of green paper, then they are glued to a dark branch. Making an orange is even easier. To do this, draw a circle on the back of the orange paper. To make it even, let the child circle a suitable round object or pattern of this shape. When he glues the fruit, it remains to attach a small circle of black color to the side with glue. So the orange will become more realistic.

To make an apple look like a real one, you can cut one half of it out of yellow, and the other half out of red or green paper. These fruits are placed in a vase or basket, so that the child can see how they can be beautifully arranged not only on paper, but also on a real table.

Christmas garland of flags with your own hands

The organization of any holiday is accompanied by the preparation of a delicious and hearty table, a selection of exciting contests and entertainment, as well as elegant decoration of the room. The most appropriate and original de...

Yakut laika: description of the breed and photos

Dogs, which we will talk about today, belong to one of the oldest breeds. According to archaeologists, the sites of ancient people of the Neolithic era found in the territory of present-day Yakutia, the sleds and bones of dogs (pr...

How to rinse the laundry, it will be useful to know every hostess

Every woman once faces the question of how to rinse her underwear. Girls and schoolgirls do not care about this question. Each family usually has a washing machine, which makes this process easy, without requiring a special applic...