One of the most recognizable landmarks of the capital of Udmurtia, city of Izhevsk, is the Cathedral of St. Archangel Michael. This magnificent building has a tragic history, but today it appears before the faithful in all its recreated glory. In addition, St. Michael's Cathedral (Izhevsk) is often the venue of the seminars, religious talks and other activities aimed at restoring the spirituality and struggles with some evils of modern society.

The First Church on the site of the Cathedral, where from the mid 18th century was the city cemetery, was built 1765. Later it was demolished and built there the Church of the Holy Trinity. However, this building had a long history as it was burned in 1810. After 45 years in the same place built a 30-metre-high chapel, which was consecrated in the name of the Archangel Michael, in honor of the patron Saint of the Grand Prince Mikhail Romanov, the chief of all weapons production in the Russian Empire. 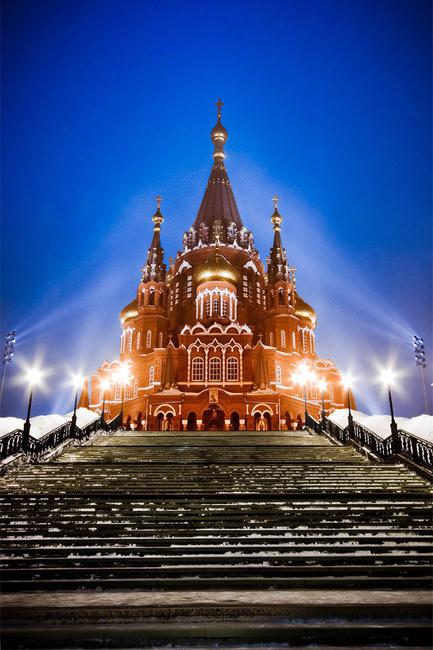 In 1876 in Izhevsk started a campaign to raise funds for the construction of a new large Cathedral. It took active participation of all citizens regardless of their financial situation. For example, it is known that workers of a local factory was transferred to the construction Fund part of their salary. The major charitable contributions made many famous yizhivtsi, including merchants. The correct amount was collected to 1897, and then in the Foundation of the Cathedral was laid the first stone. Ten years later, when the building was almost complete, the construction had to be closed. Only in 1915 was able to consecrate the high altar, and the temple received the status of besplatnogo assigned to Alexander Nevsky Cathedral. 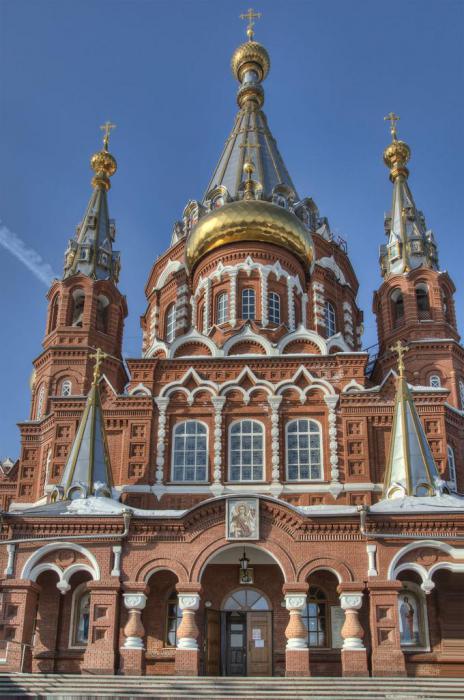 Despite the fact that turmoil has prevented to implement the project in full, the construction was very significant. Suffice it to say that the first St. Michael's Cathedral (Izhevsk), built in 1907, had a height of 70 meters, and the diameter of its base was 43 meters. The temple was visible from 20 km away, and it had 10 chapters and 11 bells.

In 1929, St. Michael's Church was taken away from the faithful, and sealed by the officials of Izhevsk police. Then it was transferred to the local history Museum, and in 1937 it was decided to demolish the building. Thus, the destroyed structure, built, as they say, the world, and his place was taken by the square, which has become a favorite place for walks of yizhivtsi.

In 2000, the authorities of the Udmurt Republic the decision was made about the need to recreate the destroyed temple at the same place, where he remained until the demolition. In 2004 in the Foundation of the future construction was laid the consecrated cross. The construction was accelerated pace. As a result, in may 2007, was consecrated the lower limit of the Cathedral, and in August — the main altar. At the same time hosted the first Liturgy in the presence of senior officials of the Udmurt Republic held a Patriarch Alexy II. 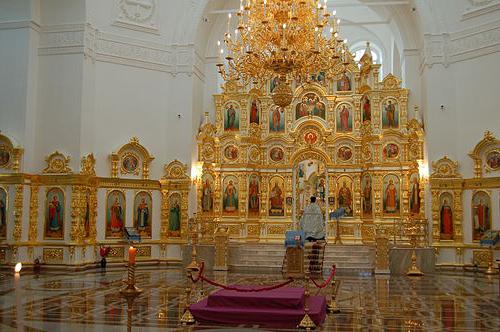 Interior design and the shrines

Restored the temple has rich interior decoration. Suffice it to say that wall painting of the Cathedral made by artists invited from Palekh, samples of the murals of Moscow Cathedral of Christ the Savior. Notable features are the carved iconostasis of the limit and the only in Udmurtia faience iconostasis of the lower Church, made in the Urals.

St. Michael's Cathedral (Izhevsk), photos of which adorn most of the tourist guides in this city, famous not only for its interior decoration and magnificent architecture. After all, there can be many venerate Orthodox shrines. In particular, the Cathedral houses the miraculous icon of the 16th century, with relics of the Holy apostles Bartholomew, Luke, James, Matthew, Mark, saints Gregory the theologian, Nicholas the Wonderworker, Basil the Great, St. Alexander Nevsky, St. George, archdeacon Lawrence and Stephen's and St. Ephraim the Syrian. 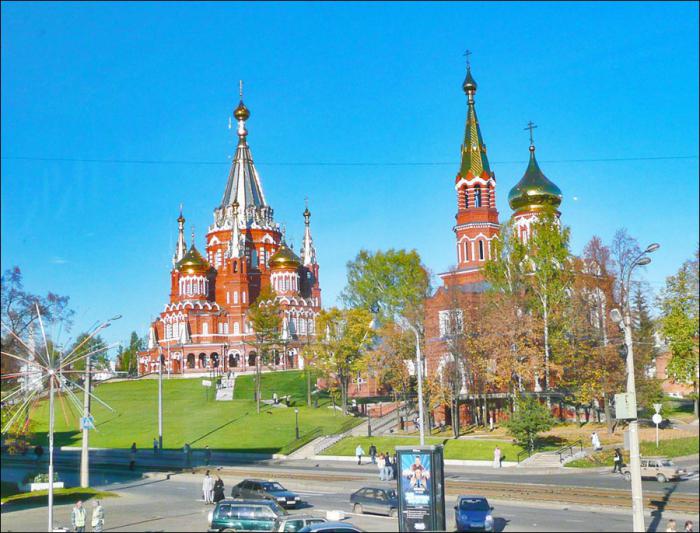 In addition to prayer rooms, on the territory of the Cathedral there are also:

The Temple was already more than one year participated in various cultural and educational activities aimed at the return of Russians to the bosom of the Church. For example, for the past few years, has become the venue of the festival of ice sculptures in the celebration of Baptism the area adjacent to the place where stands St. Michael's Cathedral (Izhevsk). Phone temple: +7(3412)51-01-77.

The Main theme of the works of the festival in 2015, steel angels, which the participants cut out of a huge transparent blocks. Thanks to the beautiful mood lighting within a few weeks, the site with the works of the carvers was the most beautiful area of Izhevsk, where the goal is to admire the sparkling figures flocked thousands of citizens.

The Temple is located at the address: K. Marx str., 220. It is the highest point of the city, and provides spectacular views. It is believed that after the demolition of the Cathedral of St. Archangel Michael in his place was not built other structures with the most famous igauzu — M. T. Kalashnikov. He is ready to take the faithful everyday from 7:00 to 19:00. St. Michael's Cathedral (Izhevsk) regularly becomes a place for spiritual conversations with pastors of the diocese, during which parishioners and other believers can know the attitude of the Russian Orthodox Church to various current issues. To see their schedule, you can call the phone number listed above. 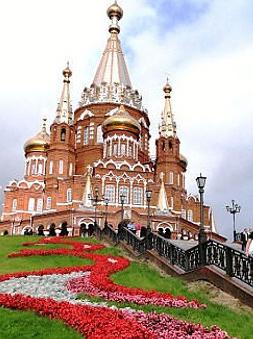 Once in the capital of Udmurtia, be sure to visit St. Michael's Cathedral, which without exaggeration is one of the nicest not only in this country but throughout Russia.

recently, Alanya in Turkey was a simple little town. And now this place is one of the most visited resorts in the country. This place is suitable for those who stay in a noisy companies prefer quiet, solitary pastime. All hotels A...

Think about where to stay during your holiday in Anapa? “Odyssey” is a lovely Guesthouse with a long history, which is located just 50 metres from its private sandy beach.quick overviewGuesthouse “Odyssey” ...

In the magic of Sardinia is located the resort Horse Country Resort. This is a unique place, where the nature blends seamlessly with modern standards and quality service. In addition, here you will have the unique opportunity to s...

Hot water bottle with cherry pits with their hands: technique of manufacture and recommendations

Most parents know the pain newborn baby colic arising in his stomach. Which only means do not go to ...