The Theme of our article - Halong Bay (Vietnam). Photo of this natural attraction will be enough to understand why UNESCO in 1994 included the Bay in the world heritage list of humanity. And all tour operators who send their customers to South East Asia, the refrain saying: “If you weren't looking at Halong Bay, you haven't seen Vietnam!” well, let us follow the recommendations of the employees of the travel Agency. In this article we will tell you when is the best time to visit Halong Bay how to get there from the popular resorts of Vietnam, where to stay and what else to see in the area. The origin of the Bay is connected with a beautiful legend about the dragon. The beast lived long in the mountains, until they suddenly respirable. Destroying everything in its path, the dragon plunged into the sea. Now from the surface of the water, sticking only his teeth-the island. And the name “ha” is translated as “the place where the dragon descended into the sea”. 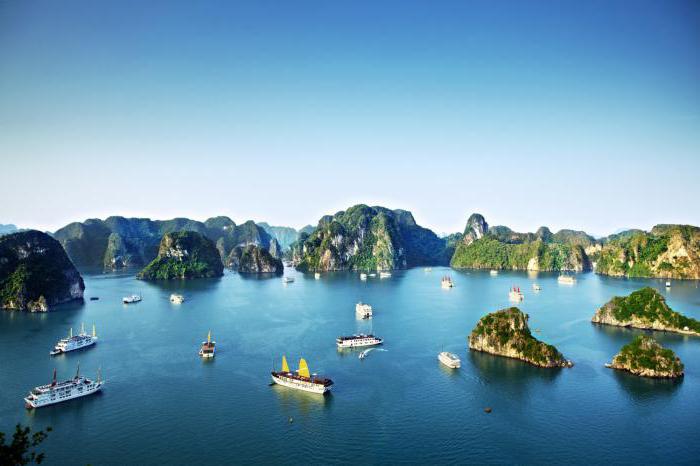 Located Where the Bay

The Main natural attractions of Vietnam located in the North-East of the country. The city belongs to the province Guangning. And Halong Bay (Vietnam) is part of the Gulf of Tonkin (Beibu locals call it) South China sea Pacific. What is so famous this lagoon? Her area – one and a half thousand square kilometers. And across the Bay in a chaotic manner scattered over thousands of Islands six hundred and simply rocks. Some such bizarre form that when you look at them it looks like you & ndash; Alice in the country of fairy tales. If you swim to the Islands by boat reveals numerous caves and cave-with stalactites and stalagmites. There are deserted beaches, jungle and other beauty. In a word, Paradise. And to visit here is recommended for everyone who came to this country in Southeast Asia. 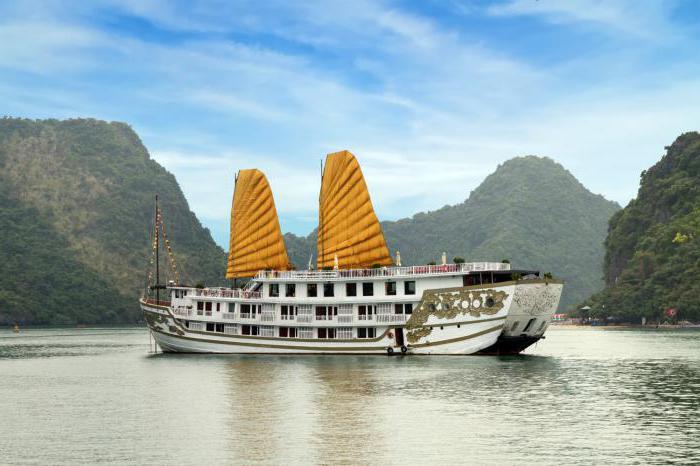 When is the best time to visit ha long

This attraction of divine beauty is never lacking in guests. And preying on the inhabitants of the eponymous city, which, with the exception of the Bay, nothing interesting in terms of tourism is not represented. But do not forget that this region in Northern Vietnam. Halong Bay in winter it is often shrouded in fogs and pour a drizzle. This off-season lasts from February to early April. And though the sea is not stormy, visibility is pretty bad. Yes, windy, damp and a little cold weather is not conducive to admire the beauty. And the rest of the year, the Bay appears to the gaze of astonished travellers from all over the world in all its irresistible charms. If you want to combine the contemplation of natural beauty with swimming, of course, well maybe the hot summer months. But then there is the strong possibility of rain. High season in these parts are the periods April-may and September-October. 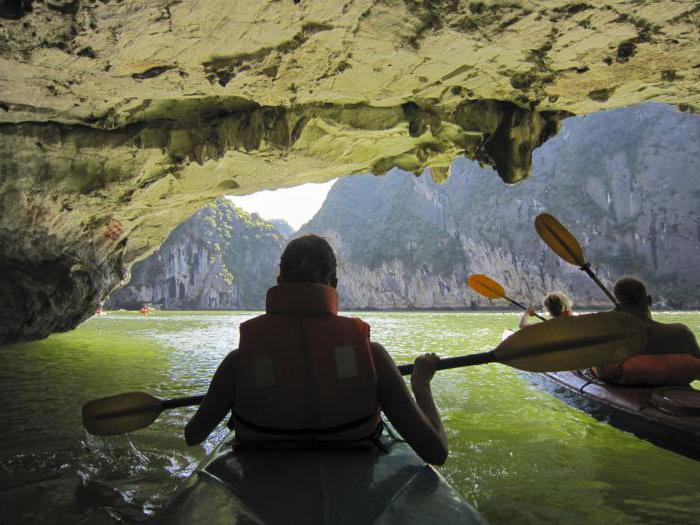 Vietnam Halong Bay: how to get

From the capital attraction alienate a hundred and seventy kilometers. So here you can easily go for one day. From Hanoi to Halong city and Shuttle buses. They depart from the my Dinh. Have the opportunity to go and train, both conventional and high-speed Express. Another interesting option is to buy a one - day excursion to Halong Bay. Quickly takes you to the place in a comfortable minivan and take on a tourist boat to the largest island of cat BA. The tour lasts six hours and includes visits to iconic landmarks of the Bay. Individual tourists need to reserve a place in the boat. The ticket will cost one hundred and thirty thousand dongs. This price includes entrance to the national Park. By taxi from Hanoi the trip will cost fifty dollars. 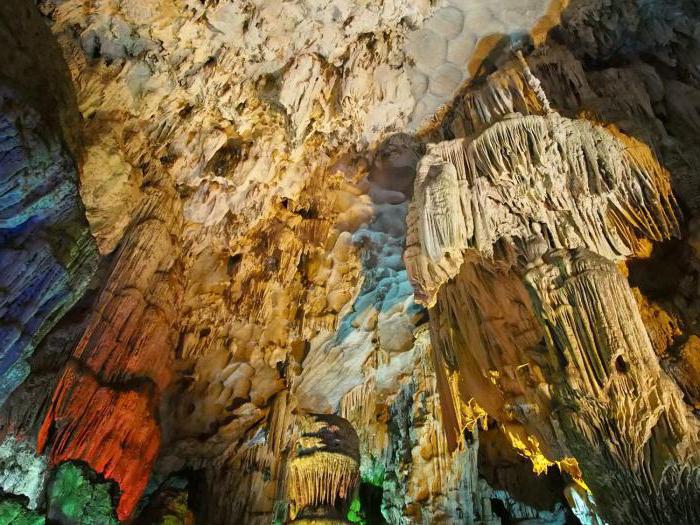 Day trip to the fabulous Bay from other cities-resorts

Many tourists dream of seeing with my own eyes the wondrous Halong Bay (Vietnam). To get there from Hanoi is easy. Because modern forms of transport will help to overcome the distance of one hundred and seventy kilometers a couple of hours. But is it possible to visit the Bay in one day, coming from other resorts in Vietnam? If you are staying in the North, Haiphong or Sapa, then get to ha long city is also not difficult. Maybe you don't even need to go to Hanoi. But is it possible to visit the Bay from more southerly resorts in the country? From the island of Phu Quoc or Ho Chi Minh city is unlikely to succeed. At least for one day. Available for backpackers Halong Bay (Vietnam) from Nha Trang? The local Bureau organize trips and excursions in the fabulous Bay for US $ 450 per person. But often they return the money, because he has not accumulated a sufficient number of people willing to form a group. For a hundred dollars is quite possible to go to Halong by themselves. But for this first you need to get to Hanoi. It's easy to do on Board the company “Vietnam airlines”, “Dzhetstar” or “Vietjet”. And from there, by train or by bus easy to get to the coveted Bay. 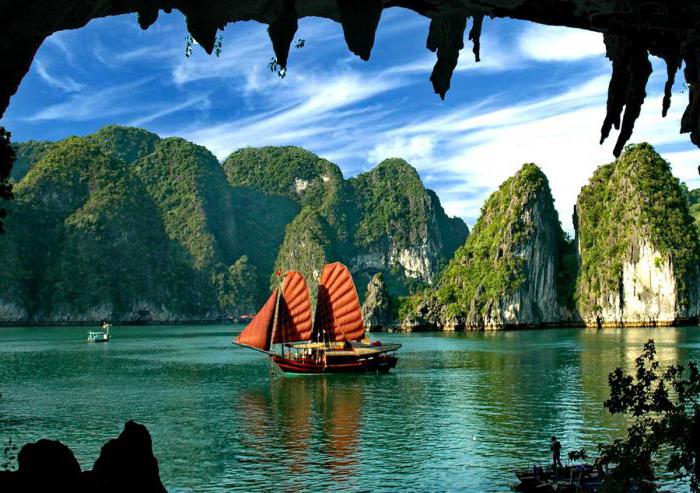 This town is called the Gateway to Paradise. Door like door. For those who run inParadise, the gates to him uninteresting. Yes, and all the bypass guides to the sights of ha long deathly silence. So what can you see in this village, built on an artificial Causeway, which connected two of the Cape? Only ha long Bay! Sandy beaches – bulk, of interest to divers, they are not. The city is considered by most travelers as a place to spend the night after enjoying an evening by the Bay. Therefore, in ha long there is no shortage of hotels. You can stay in budget hotels away from the sea or in the elegant “five” in the first line. Among the most worthy can be called “Vinpearl Ha long resort”. If you want to extend your holiday in a fantastic Bay, you can book a hotel on one of the largest of the Bay Islands - includes cat BA or Tuan Chau. Will become memorable night on Board a luxury liner (for example, “Signatyur Royal Cruise”) or traditional junks (“Imperial classic”) that is moored in a scenic location.

Types of excursions. Flight over the Bay

For travellers arriving in Vietnam, Halong Bay is a “must see № 1». Therefore, tour Desk offers a range of excursions in the Bay. Those who are not sorry to part with 175 dollars, you can see Halong Bay from the height of bird flight. In order to take a helicopter tour took place, you only need six people. To book such a trip in the firm ‘Northern airport Flight Service company”. Departures are every Saturday at eight in the morning from Hanoi Gia Lam. If you – guest «Sofitel Metropol”, you will be taken to the helipad for free. From the top you will see all of the Islands of Halong Bay and make breathtaking photos. 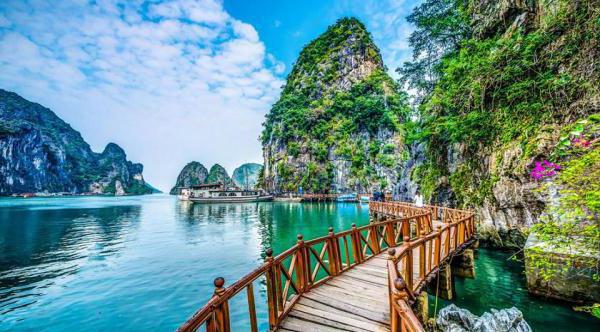 To reach the nearby island of Tuan Chau, you do not need a boat. Because it connects to the mainland by a bridge one kilometre. The island has a Dolphin Park and a few hotels – both expensive and simple guesthouses. The usual tour includes a two-hour running around the Bay on a simple boat with landing on one of the beaches of cat BA island. Russian tourists arriving in Vietnam, Halong Bay may be of interest to Titov island. The famous Soviet cosmonaut visited here in the 70-ies, and is now one of the rocks bears his name. Islands of the Bay abound with caves and grottoes where it is possible to penetrate directly into the boat. Cat BA island is famous for pristine rainforest and mangroves along the banks.

What to bring from ha long

This Bay is famous all over Vietnam. Halong imprinted on a promotional poster about the country replicated on many postcards, magnets, mugs and t-shirts. Therefore, the Souvenirs you will be provided. As a reminder of the beautiful legend that tells of the origin of Halong Bay, get a figurine of a dragon. Also on the souvenir market of the city you can buy a nice model of traditional junks under crimson sails. Such cruising around the Bay. If you book a boat in advance, it is possible to hold on Board the night or go fishing with her.

One of the most enigmatic sights in the world located in the province of Xieng Khouang, shortly after she was named Lao archaeological mystery. And today the origin of the creations of human hands remains a mystery over which unsu...

In the Valdai hills in the eponymous national Park - one of the largest in Europe - is a unique, crystal clear lake Dinner. On the coast this reservoir is located... tale – “Berendeevo a Kingdom”. The clear water...

Tired of irreproachable European service? Want to enjoy exotic Asian hotels? Planned your holidays for the winter? In all these cases Vietnam as a tourist destination will be the perfect option. Phan Thiet is the most popular reso...