In terms of the species composition of temperate forests lose much rain. Trees of Central Russia are few and, it would seem, should be known to all. But it's not. Of course, everyone easily learns birch, pine or spruce, but not everyone will distinguish an elm tree from a maple or will be able to describe what it looks like lime. Also it should be noted that most of the woods are just trees, and in the cities – other. In this article we will focus primarily on forest types.

The Trees of Central Russia: the names

The Most common coniferous tree of the East European plain – pine. Slightly less popular spruce. Sometimes there are silver fir and larch are deciduous. But the dominant position belongs to deciduous. They grow faster than conifers, and easier to adapt to changes in the environment, making take root even in the big cities. According to research carried out on the territory of the Central Russian upland, the predominant indigenous species are the English oak, Linden serdtselistnaya and the common ash. Of course, everywhere there are birch and aspen. Forest along the banks of the rivers grow various species of willow and alder. In shady places gets rough elm (aka – mountain elm). Characteristic trees of Central Russia – and a variety of maples, common ash and wild Apple tree. In the cities, widespread decorative forms of Apple trees, black and white poplar, common horse chestnut. 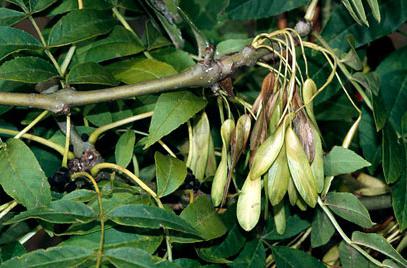 This tree is one of the most impressive in our woods: it reaches the meter of height. The ash straight trunk; bark grey-greenish. The tree prefers moist but not waterlogged soil, so it often grows along streams and rivers. Young ash trees in contrast to adults to light not demanding. In winter the tree is easily identified by the large black buds. Crown of ash – set high, fishnet, beautiful shape. He has very distinctive leaves-long (35 cm) pinnate.

In the trees of Central Russia – it is the most affordable material for identification. Analyzing their form, to determine the type relatively easy.

Is quite high (up to 35 metres) tree. Grows on plains and foothills, often on cliffs, slopes. Survives well in cities and therefore often used as Avenue plants. The Linden straight trunk with wrinkled grey bark. The trees that grow on the glades, a powerful egg-shaped crown. Linden-this tree is a honey plant. It blooms later, in mid-summer. Small white-yellow flowers have a pronounced sweet aroma and attract bees. In addition, they are drug. 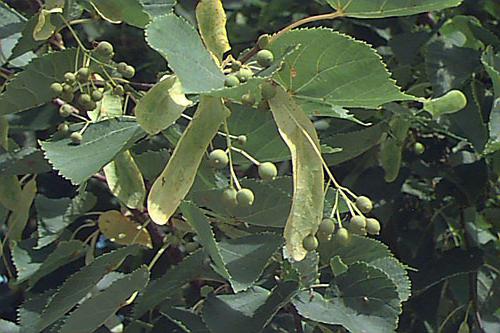 Flowers in a bun at the base of which is a long sheet-lionfish. Fruits limes are round nuts. Leaves – roundish-cordate, slightly resembling the poplar. Deciduous trees of Central Russia, as a rule, special longevity is no different, but serdtselistnaya lime can live up to 800 years.

This tree has nothing against high humidity. It is found in the valleys of the rivers and even swamps. Alder grows up to 30 meters. Trunk she has dark, deep “wrinkles”, wood – reddish-yellow. The leaves are rounded, with a notch opposite the stalk. Alder blooms in mid-spring, just in time for the floods. Male trees have flowers clustered in a long, yellow-purple earrings. Female inflorescences have the form of solid cones.

Alder loves the light and is growing rapidly. This is a useful plant. Its wood is suitable for use in high humidity conditions. 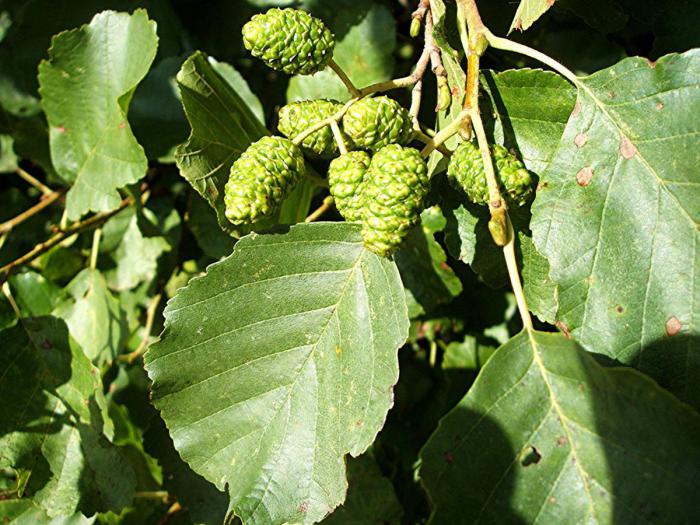 The Trees of Central Russia are drugs, the individual parts are often used in medicine. Is no exception and the oak, with its dark and very rough, but the healing crust. This tall tree grows both on the hills and in the valleys. He has gnarled branches and easily recognizable leaves, which are called peristolopastnye, as they consist of several pairs of conjoined blades.

The Oak trees bloom in late spring. The fruit is a bright brown-yellow acorns (2-3 pieces with long petioles). Oaks are long-lived, their wood is hard and does not rot. For this reason, it's used to make expensive furniture "century”. 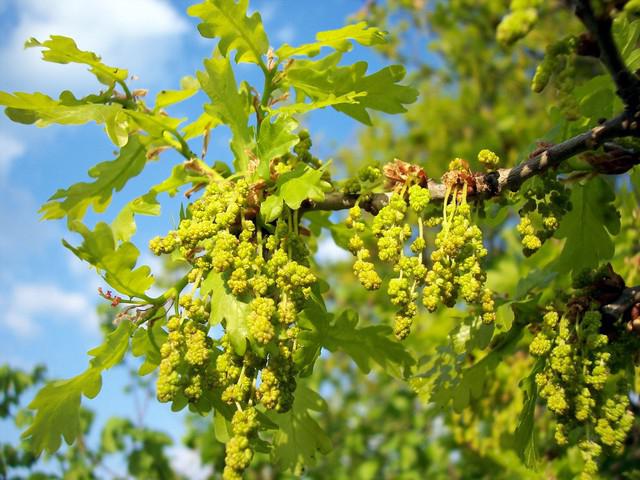 The Name of the tree due to the abundance of longitudinal cracks on the bark. The height of the ILM – 30 meters, while the plant is very slender, with long stout trunk and a relatively broad crown. Trees of Central Russia different ruggedness: for example, rough elm gives abundant shoots in damp lowlands and in the mountains, climbing to a height of 1000 meters above sea level and rooted on the rocky slopes. Elm is not demanding so much to the ambient temperature, how much to soil fertility. He has big, rough and not very symmetrical oblong leaves with tweakability edge.

Rough elm appreciates partial shade, so in open spaces will not meet. It blooms very early; purple-red flowers clustered in tight little bunches. By the summer the fruit of the elm ripen and fall off. They represent a flattened nutlets surrounded by two fused wide blades. 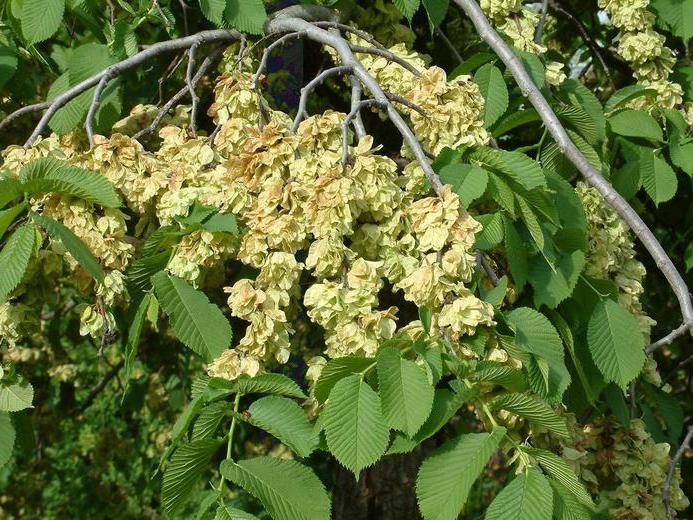 To Identify these plants will practically everyone, the determinant of the trees in Central Russia there is unlikely to be needed. But still, speaking about the most common plants we have, it is impossible to ignore these types. By the way, not everyone knows that the second name aspen-the trembling poplar. This tree is very undemanding to soil, but likes sun. Aspen is taking a fresh cutting and clearing, but her age does not exceed 90-100 years. The trunk is long and smooth, with a gray-greenish bark. Crown small, rare, and set high. The leaves are almost round, with rough edges. The slightest breeze makes them tremble, due to the special structure of the petiole. Top aspen leaves dark-green, bottom-gray. In autumn they become a rich deep red color.

Black poplar known as “cultural” tree. It is more commonly found in cities along the highway or on rural streets than in the woods. Poplar appreciates the sun and moisture. Under favorable conditions the tree grows up to 40 meters. Bark grey, rough, with longitudinal cracks. Crown extensive. Leaves – cordate.

So, the article briefly describes the trees of Central Russia, whose names are well known. View photos, takes a little practice – and to distinguish one plant from another is not difficult. Fortunately, as already mentioned, the forest flora of temperate climate not so numerous.

handbags and their owner, has always attracted attention, at least that is the fashion accessories, without which it is difficult today to imagine a modern woman. There is therefore nothing surprising in the fact that there were m...

the Wind is called large-scale fluxes of atmospheric gases, moving in the same direction and generally at the same speed. In meteorology the types of winds  first of all classified according to the direction of movement, spee...

The indigenous population of Kamchatka

One of the most remote regions of Russia is the Kamchatka Peninsula. The population of this part of the country is quite heterogeneous in ethnic composition, although with a clear predominance of Russian. This ethnic group began t...

Space is far to ordinary citizens. This is a huge space, people have tried to conquer many years. Developed secret technology and fuel, to finally one day get him open space. All the famous Yuri Gagarin, dogs the shooter with a Sq...