Lakshmi: the goddess of harmony and prosperity

Despite the fact that in Hinduism the gods and goddesses quite a lot, Lakshmi - the goddess of harmony and prosperity - deserves special attention. She is the wife of Vishnu, and that says a lot. It is believed that Lakshmi goes with God in all its incarnations. 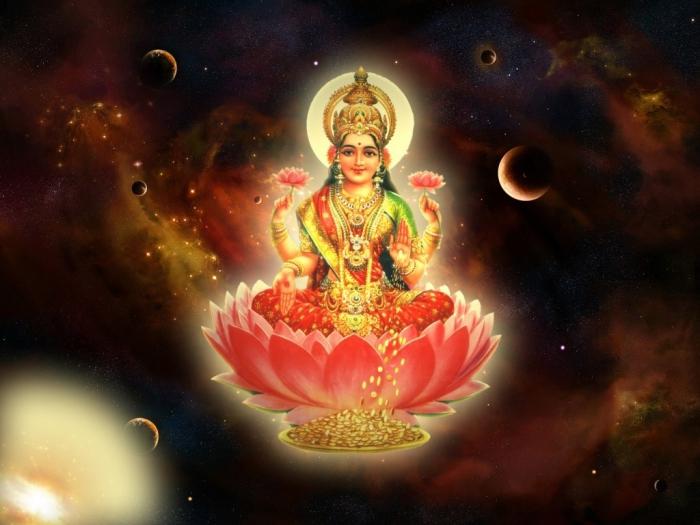 So it is a perfect example of his wife. Lakshmi is the goddess who personifies generosity, prosperity, harmony and beauty, compassion for all living things. It can grant peace in the family, so say if everything is OK, then Lakshmi lives there. If the house of misfortune, and the family lives in fights, it is believed that this house goddess left.

There are several legends about how there were Lakshmi. According to the most popular version, the goddess was born during the churning of ocean by Devas (gods) and the Assyrian (demons).

The Second legend is less popular and not as beautiful, but the most plausible. According to this version, Lakshmi is the daughter of sage Bhrigu.

In the third version, Lakshmi emerged from a Lotus that floated on the surface 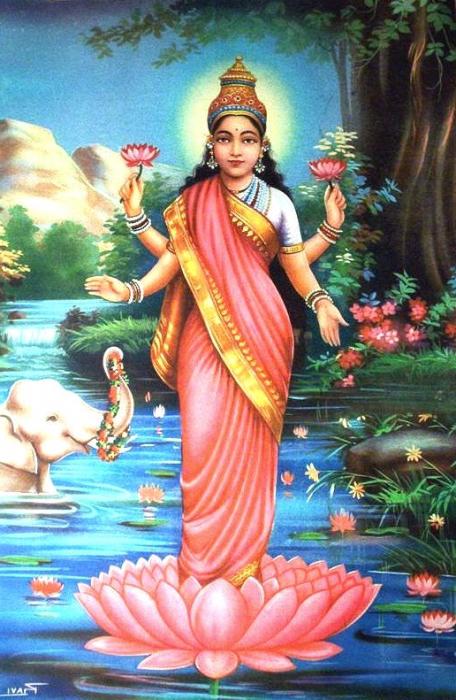 The world's waters. Found version, on which the goddess appeared from the Lotus over the head of Vishnu. But in any case, all versions of the legends agree that she accompanies Vishnu in all his incarnations.

How to describe Lakshmi? The goddess is usually depicted as a beautiful young woman with multiple arms (up to 10 in some churches, where the worship of this deity). It is also depicted on a Lotus. Almost always watered the elephants. This shows that the Indian goddess Lakshmi combines the power of the divine (Lotus) with worldly power (the elephants). Like all the gods, Lakshmi is depicted in a different color, which has deep symbolism. For example, dark skin indicates that you have before you the dark aspect of the goddess. Golden yellow - a symbol of abundance. White - pure nature. But most often their skin is pink - a symbol of compassion for everyone and everything. 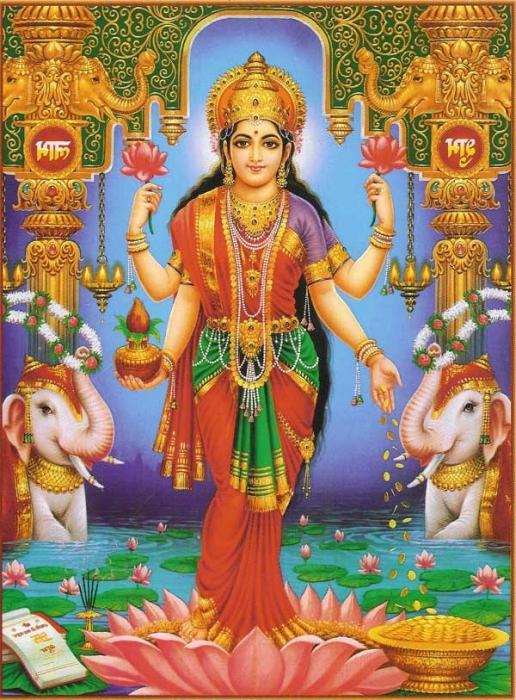 Lakshmi is the goddess cast with many limbs, because it can give people four life goals. This wealth, bodily pleasure, righteousness and bliss. However, most often Lakshmi is depicted along with Vishnu as she is his Shakti, the creative energy, which is inseparable from him.

What do the symbols mean in the hands of the goddess? Since Lakshmi is the goddess of prosperity and abundance, and the symbols are mostly associated with it. As mentioned, the Lotus flowers in his hands - the symbols of the two worlds. But how they revealed shows degree of evolution of these worlds. The fruits Lakshmi is the symbol of the result of our labors. While the goddess will not have mercy, man will have achieved nothing in life. Coconut, interestingly, corresponds to three levels of creation: causal (juice nut), slim (flesh) and coarse (shell). Pomegranate and citron - symbols of the worlds, who keeps the goddess. The fruit of Billy is Moksha (the higher the fruit - the reward for a righteous life). Sometimes Lakshmi and holds a vessel of Ambrosia. This is a direct symbol of the fact that it can give people eternal life (similar to the Greek Ambrosia).

If you decide to purchase a statuette of Lakshmi, to place it better in the hallway or in the office, because these places are associated with wealth and prosperity.

In 2012, in the city of Cherepovets, Vologda region, has consecrated the newly built Church of saints Athanasius and Theodosius. The initiative of building the Church, made in 2004, the residents of the city. Two years later, with...

Pentecostals: who are they, what do they believe?

Orthodox Christianity is the leading religion in the countries of the former Soviet Union. The last decade began to openly Express themselves in various sects and denominations. One of such directions - the Pentecostals. Who they ...

What is obedience? Obedience in the monastery. The meaning of the word "obedience"

In the Orthodox Church, obedience is perceived as the execution of certain orders. However, to properly understand this, we must first carefully examine what is obedience. And most importantly, what it means?the Very meaning of th...

What is the meaning of the name Anna for a girl?

meaning of the name Ann for girls translates from Hebrew as “merciful”. The main features of her character are fair and uncompromising. Usually she is very reserved. About her true feelings to learn is very difficult. ...

Indian mandala - what is this symbol?

Indian mandala came to us from Buddhism as a primary sacred symbol. Many fans of the secret knowledge attracts mandala: what is the sign of what hidden information it contains, how to apply it in practice?so, the mandala is a draw...