More than three hundred years, the majestic building of the Catherine Palace is the main part of Tsarskoye Selo. Around the Palace stretches a gorgeous Catherine Park. Despite his advanced age, Catherine Palace still impresses with its scale, grandeur and beauty. Over the years the long history of the Palace gave way to a generation of royalty, in the design and construction involved a lot of great architects. 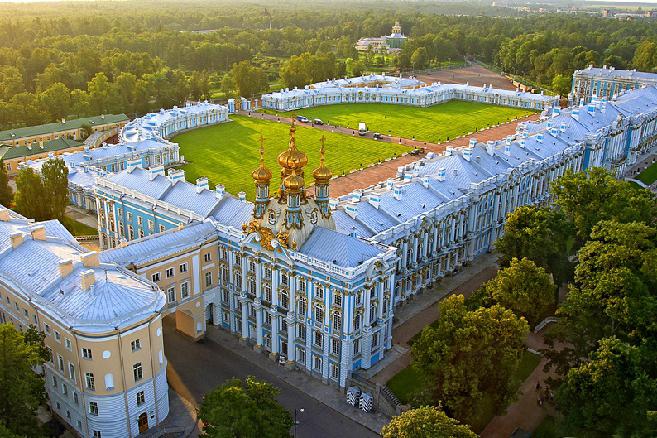 St. Petersburg, Catherine Palace. The beginning of the story

At the beginning of the XVIII century in the place where later was built the luxurious Palace, there was a Finnish village called Saar manor. In 1710 these possessions were donated by Peter to his future wife Catherine (Martha Skavronskaya).

Founded in 1703, St. Petersburg residence of the king was considered Peterhof, located on the shores of the Gulf of Finland, it was built in 1710. But for many centuries all heirs to the throne, more loved Catherine Palace in Tsarskoye Selo and most of the time spent there. The Palace became the main residence.

In 1717, Catherine starts the construction of the Palace. Construction was engaged by the German architect Braunstein. At the same time he studied architectural ensemble in Peterhof. The work was completed on the building in 1724, on this occasion was organized a big feast. "the Stone chamber" - so named for its two-storey mansion Catherine I.

The reconstruction of the Palace in Elizabeth

Elizabeth became the new owner of the Palace chambers in 1741. Under her direction at the end of 1742 the architect Zemtsov starts rebuilding of the Palace, but soon his death does not carry out the plan. To work after was involved in such prominent architects A. V. Kvasov, assistant to his Trezzini, in 1745 – S. I. Chevakinsky 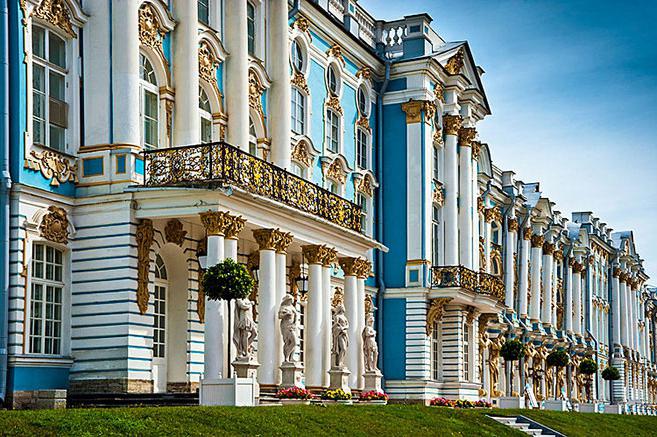 In 1752 to work was attracted by the great architect Rastrelli. Elizabeth decided to completely change the shape of the Palace as it is considered small and old-fashioned. It was after this massive renovation, which lasted four years, was born a beautiful, modern Catherine Palace, which surprises us with its splendor today. Presentation of the foreign guests and dignitaries was held on July 30, 1756. A Grand structure length of 325 metres has amazed guests with its scale and grandeur.

Beauty and the beauty of the Catherine Palace

To date for each tourist arriving in St. Petersburg, the Catherine Palace is in the list of sites in the first place. What is so surprised when opening guests, this luxurious Palace and surprises so far?

The building was Made in Baroque style. Huge size, as already mentioned: length of the Palace stretches along the line of the garden and is 325 meters, the beauty, the greatness, the uniqueness of the architecture, one still does not leave indifferent.

The Facade is covered in an azure color, white columns, Golden ornaments give the Palace a solemn look. The special charm of the façade emphasized Atlantes, moldings. The Northern building of the Palace was crowned with five gilded domes of the Church, the southern building had a front porch and spire with mnogokolesny star. Under Elizabeth the Palace was built on the same time on the gate, the decorations of the Palace came the famous monogram in the form of “E I”. 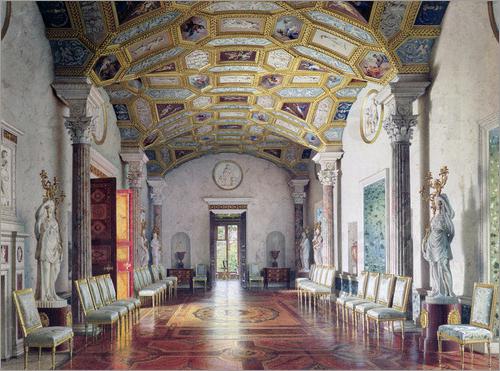 No less attractive and domestic apartments, built according to the project of Rastrelli. The entrance was located along the entire length of the Palace. The whole Front Suite was decorated with gilded carvings.

Immediately next to the Sunday Church is located Tsarskoye Selo Lyceum. It studied gifted children, including Alexander Pushkin. In his honor in Soviet times was renamed Tsarskoe Selo.

At the end of the XVIII century, Catherine was fascinated by the ancient architecture. Catherine Palace in Tsarskoye Selo during the reign of Catherine II survived the final reconstruction. For work, she hired an expert in the classical antiquity – the Scottish architect Charles Cameron. He created the Palace Blue, Silver rooms, the Arabesque, Lyons living room, Chinese room and dining room Dome. All the interiors created by Charles Cameron, who stressed strict sophisticated style, surprised the beauty and the mystery of finish. 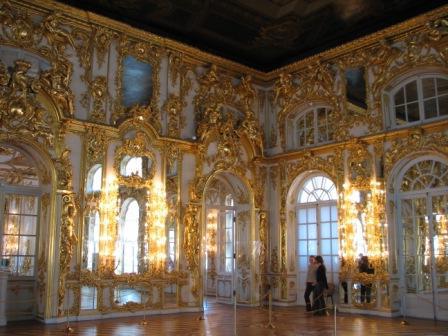 Thanks to the architect of the Catherine Palace acquired the Chinese blue drawing room, state blue, Green canteens. They were equipped specially for Pavel Petrovich – the son of Catherine II and his esteemed wife, for they were built bedchamber and ofitsiantka.

In 1817, under Alexander I, the architect Stasov created the state study with several adjacent convenient rooms. All these rooms have been decorated in a style dedicated to the illustrious victory in the war with the great Emperor Napoleon.

1860-1863 years the Catherine Palace was perhaps the last major phase of reconstruction and reorganization. Engaged in the work of the architect Monighetti. The staircase of the Palace was presented in the style of “second Rococo”.

Until 1910 Catherine Palace was known as the Great Tsarskoye Selo.

The Tour of the Palace

Before each, who visited Tsarskoe Selo, Catherine Palace appeared as the wonder of the world. Bypassing the usual modern interiors (turnstiles, souvenir shops, cash), travelers will certainly find themselves in a Large hall or Throne. Its dimensions are very impressive: length-47 meters, width – 18. This hall is the largest among all St. Petersburg palaces. A picturesque plafond covering the whole ceiling shows an allegory of Abundance, Peace, Navigation, Victory and War, Art and Science. Decorated in artistic style, parquet a long time attracts curious glances. 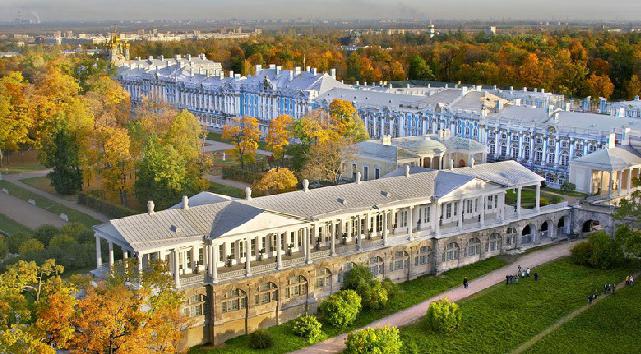 Room with huge Windows, as if together, moving from one to the other. So, moving on, you can visit the Silver, Blue cabinets, Arabesque, Lyon living room, Chinese room, Domed dining room, Ofitsiantka room, the Bedchamber decorated by Charles Cameron. Special attention should be paid to the mysterious Amber room.

In 1716 the Prussian king presented a gift to Tsar Peter: the amber panels, which was taken to Petersburg. Catherine Palace they adorned only in 1755. Itself the Amber room is slightly higher than the area of the panels, and the Empress Catherine II in 1763, ordered the German masters plus the fragments for the amber panels. For these purposes it took 450 kg of amber. Your final great view of the Amber room found in 1770. The huge mural took three tiers. The Central place was covered mosaic depicting an allegory of the five senses. The whole room was lined with the finest amber jewelry, which had been worked by the best craftsmen of XVII-XVIII centuries. 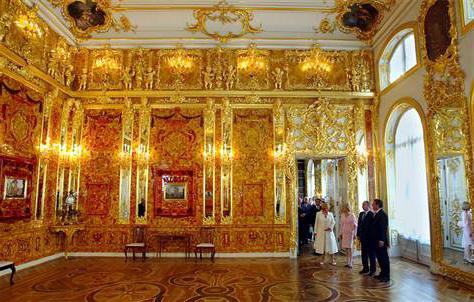 The Amber room in the twentieth century

The Fragile amber panels components required special careful handling and care. During the war it played in the fate of the Amber room a fatal role. To better preserve the room during the evacuation was not touched, she was left in the Catherine Palace. The Nazis transported it to Konigsberg. During the war the Amber room disappeared. Put forward several versions of her disappearance, each of which seems plausible.

In 2003 in the Catherine Palace to mark the 300th anniversary of St. Petersburg were recreated Amber room. More than 20 years, the whole staff, including conservators, historians, chemists, criminologists have labored to return the masterpiece to life. For work was used by the Kaliningrad amber, which was treated by special technology. Now restored Amber room again. Well, where was lost the original? The mystery remains unsolved.