The Symbolism of this country interesting by the presence of several variants of the logo – big and small. Each are important to understanding the history of the state, so they should be considered separately. 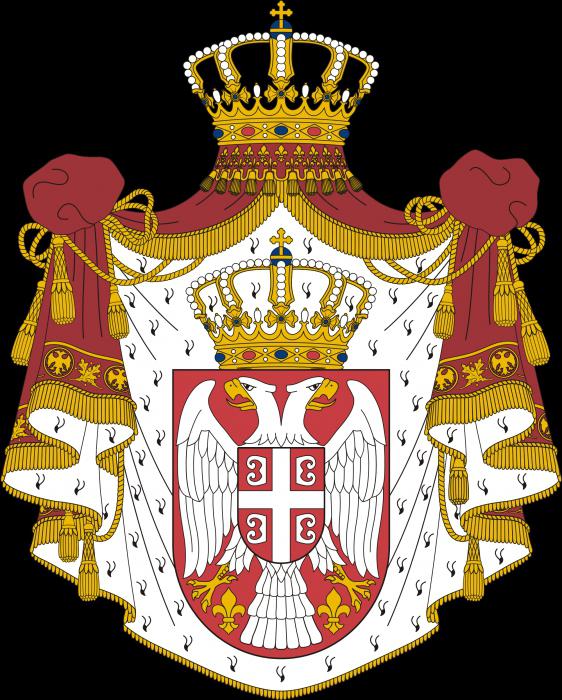 The coat of arms of Serbia is a symbol of the sovereignty of the country, which was approved in August 2004. He was then chosen as the new anthem and flag, which were replaced by signs in use at the time of entering the territory a part of Yugoslavia. Large coat of arms of Serbia depicts a double-headed eagle. On his chest lies a red shield. There is depicted the so-called Serbian cross with four ognyami. Above the shield are placed a cloak and a Royal crown. They coincide with the images of the coat of arms of the dynasty of Obrenovica, which was adopted in 1882. The use of such symbols is only a reference in history of a state without the monarchy. In the world there are other countries that are used in coats of arms the image of a Royal crown or other elements, but they are all democratic republics. These include Poland, Bulgaria, Hungary, Russia, Montenegro and Georgia. 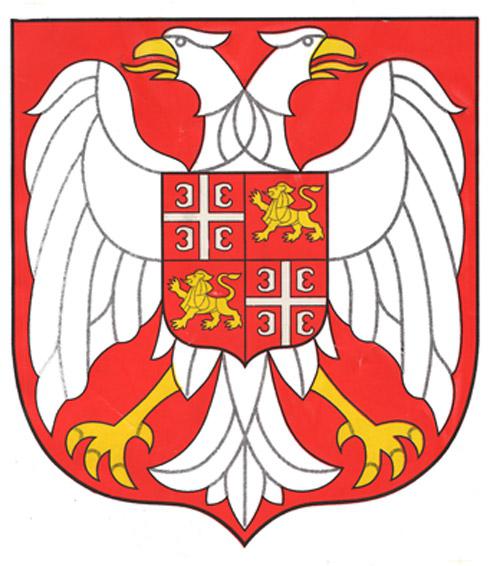 Small coat of arms of Serbia looks like a red shield, which shows a silver double-headed eagle, surmounted by a crown. On every head in the nine of feathers, beaks facing in different directions and is made in gold color, they are wide open. The wings open to form the tail and head shape of a cross. The feathers on the neck of the eagle is distributed in four rows, each with seven feathers. On the wings scheme is about the same. Each wing has four rows with different numbers: seven feathers first, nine in the second, seven in third and the same in the fourth. The Golden eagle's legs, which are directed diagonally. The tail is vertical, it has three rows of feathers seven. On the chest is a red shield with four fields, each with one silver flint. The top is a gold crown with white beads, blue sapphires and red rubies, and also with the cross. Large coat of arms of Serbia are complemented by mantle with red lining Gornostaeva in the background. In addition, the crown on it looks different: it is decorated with a larger number of sapphires. 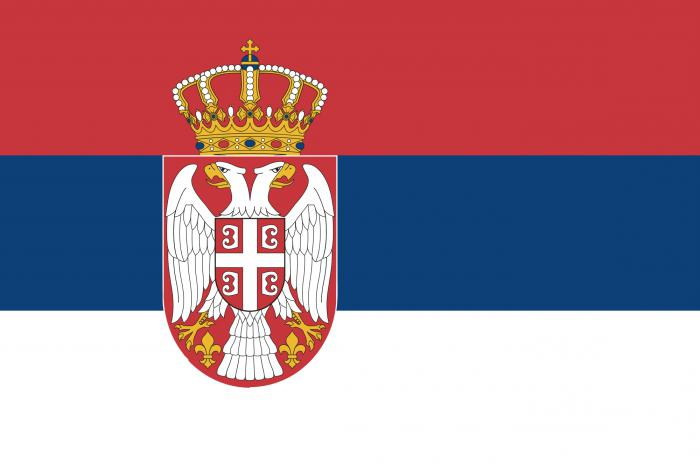 The national emblem and flag of Serbia was adopted the relevant decision in August 2004. It also describes special rules for their use. According to the Constitution, their presence defines the Republic as an independent state with sovereignty. The coat of arms can be used in two ways, it allows the law established in June, 1882. So in Vogue and great, and small. State arms of Serbia, photos of which are known to many Europeans, is used in the main option on the facades of the following buildings: national Assembly, government, President, constitutional court, national Bank. It is present on the official seals. A small emblem is used on the facades of municipal institutions.

The Country is tricolor traditional for most countries of the rectangular shape. In addition to the stripes on the flag is the state coat of arms in a small version. Colors go horizontally in the following order: top - red, middle - blue and bottom white. Each of them is associated with a particular value. So, blue has long been associated with chastity and honesty. Red is a sign of bravery and courage of the soldiers of the country. White is a symbol of peace and nobility. Interesting attitude to the emblem. It is a great location and is located on all three bands. While quite acceptable for official law of the use of the cloth without the image of this emblem.

What is a foreign trade contract

first and foremost it should be noted that a foreign trade contract is a fundamental document for any foreign transactions. At the moment, there are many varieties of this document, however, as practice shows, the most common cont...

Samples of extracts from the house register. Where can I get the excerpt from the book

this time we'll look at samples of extracts from the house register. What are the documents called? Why they can be useful? What is information display? The answers to these questions (and not only) will be found below. In fact, o...

In different situations the human body is exposed to all sorts of negative influences: radiation, dust, germs. So I invented the personal protective equipment that can be used in adverse for the people conditions. Knowledge about ...

to the right has been successfully implementing its functions, it must have its external expression. Legal doctrine under the form, expressing the will implies a norm. It is the source of law. Usually in theory allocate four: judi...