This city is one of the most famous ‘storage of Antiques” train orientation. The national railway Museum in Novosibirsk has a very impressive size (approximately three kilometers of unique exhibits of trains, cars and other symbols of this topic).

It contains a substantial collection (over 100 items) locomotives, electric locomotives, locomotives and cars, which are mostly worked on the West-Siberian railroads. In addition, the Novosibirsk Museum of railway equipment named. N. A. Akulinin (official name) has a collection of such Soviet brand cars like "Moskvich", GAZ, ZAZ (different year) and a few models of tractors, trucks and all-terrain vehicles.

In 1996, at the experimental ring of JSC «VNIIZHT” gathered a significant amount of railway equipment. In this regard, the main control locomotive put forward a proposal with regards to establishing an appropriate Museum. Subsequently began collecting all kinds of railway exhibits, and in August 2000, the national railway Museum was officially opened. It was named in honor of the founder and the first Director - Nicholas Akulinin. 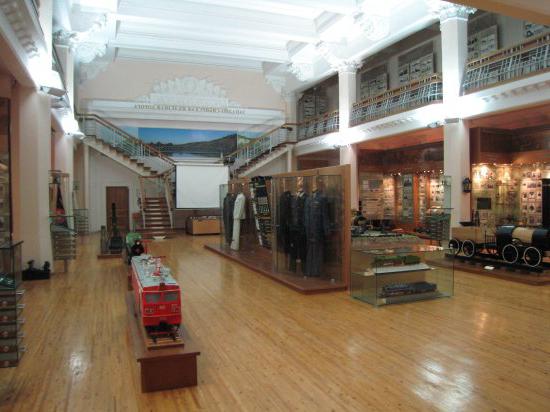 The First exhibit of the Museum

Right near the entrance is a prototype of the brothers Cherepanov locomotive. Efim and Myron built on one of the Nizhny Tagil factories (vyyskogo plant) first land steamer (the old name of the engine). So 1834 was marked by the appearance of the first locomotive in the Russian Empire. In addition to the load of 3.5 tons, it could carry 40 more passengers. 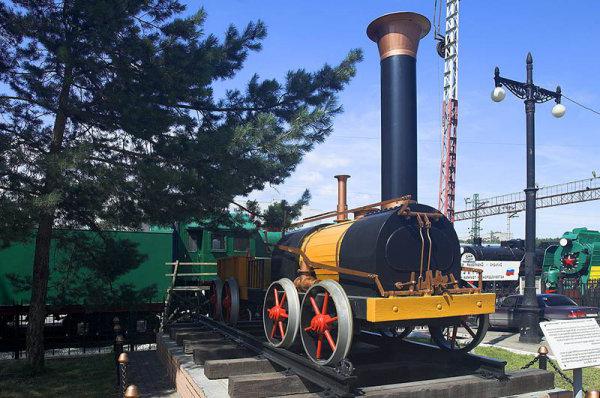 Unique models of the Museum's collection

One of these unique exhibits is a tank locomotive of the company "Borsig". It was built in XIX-XX centuries in Germany. This model does not have a tender, so the fuel and water were stored on the locomotive in special tanks (tanks) located on each side of the Central steam boiler.

Also the attention of tourists presents a model freight locomotive and tender-0040. It was made at Voroshilovgrad locomotive works 50-ies of the last century.

The national railway Museum in Novosibirsk shows a model of a freight locomotive er-789. The e series was quite popular, as a consequence, it carried out its mass production. The locomotives were among the frequently ordered models for prompt replenishment of the locomotive fleet. You can say that these locomotives survived in the stage production of three wars. Fabrication proceeded in eight countries, where it was involved in 32 of the plant. This model has become the largest among domestic locomotives.

As a rule, black stained cargo locomotives, and passenger green or blue. They look very old, but only about 60-70 years.

What other exhibits included in the collection?

Along with the prototypes of the locomotives and individual cars, there collected a large number of railway equipment. For example, the very significant size of the tank intended for the carriage of liquid iron.

You Can see a model of the mechanized trolley TD-5 (six-seater outdoor self-propelled vehicle used for delivery/transportation on railway tracks tools, mechanisms, various materials and workers).

The Attention of tourists are the platform for repair and maintenance of a contact network, as well as collobarating and icebreaker.

Vintage cars as the exhibits of the Museum collection

There are military jeeps, poligimy, ZIS-5. And "Dodge WC51", which in 1942 was shipped to the USSR. We know that its in the red Army, called “a Dodge three quarter” (due to the fact that he had a load capacity of 750 kg).

There is in the collection, and a mini-tractor white color, manufactured at the Kharkov tractor factory.

Novosibirsk steam Museum allows you to see the cars:

1. GAZ-51 – Soviet truck, which was manufactured in large quantities. Serial production began in 1946, but the first specimens gathered before the great Patriotic war. Total production numbered some 3.5 million copies of various modifications. Using the Soviet drawings he gathered in China, Korea, and Poland.

3. ZIL-157 – car of the Soviet era, having a number of nicknames: "Poltergeist”, “Baba”, “Seed”, “Crocodile”, “male”, “bans”, “Truman”, “Cleaver”, “Mortar”, “Mormon". And in Bulgaria it is called “Johan" Ukraine — “Pig” in Lithuania — “Sasakii crocodiles”. In the Magadan region, Yakutia, Kamchatka and Chukotka the car in question was called “Zurs” or “Crab”. His cabin looks like iron, so in the North-West, he was called “iron”. It is also known that among the hunters of the Central Federal district, namely Ryazanschine, this car with uniform zero the envelope of the body (KUNG), acquired the nickname “Sensual”.

This is not the last exhibits of this Museum.

It was opened in 2004 and is dedicated to the history of railway equipment directly of the Moscow railway. Often you can hear another name – to the national railway Museum at Rizhskaya square.

On the platform under the open sky installed locomotives and steam engines of different year and a different era. This ancient representatives of the railway equipment, and their modern descendants. 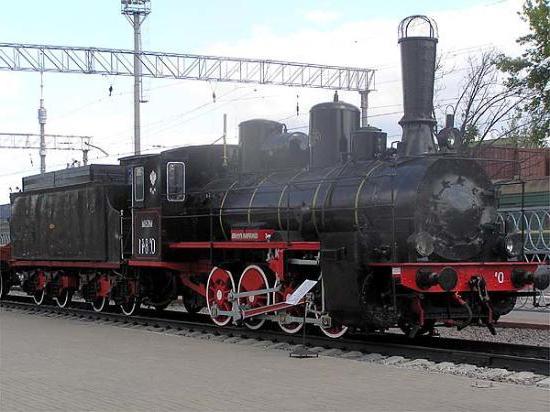 The national railway Museum at Riga station provides its visitors the opportunity to get inside of certain exhibits and even a twist in their levers, some models supplied with a ladder for the convenience of tourists.

Nearby the Museum you can see a locomotive to a considerable size, which are painted in black color. He blows smoke and hissing, as is the acting. It is possible to ride. Its component parts – the locomotive, which belongs to the series e with the license plate 774-38, and two modern car. 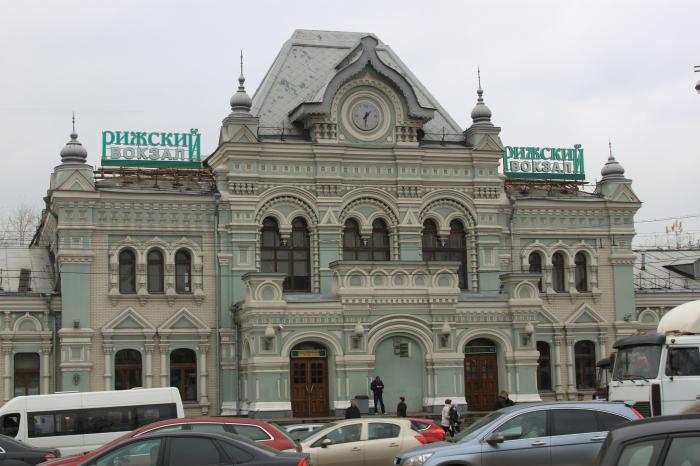 Here you can see the locomotives and snow removal equipment. There are special cars, for example, health, which operated during the great Patriotic war.

As has become clear, is considered the locomotive Museum in Moscow, more precisely, on Rizhskaya square.

Railway Museum in the Northern capital of Russia

Here gathered a very rich collection of all that is associated with railway transport: locomotives, trains, wagons, construction vehicles and ancillary items for uninterrupted movement of trains. It should be noted that the steam train Museum in Saint-Petersburg has a unique exhibits. Its exhibition model was displayed at major international exhibitions in several major cities, such as, for example, Paris (1900). 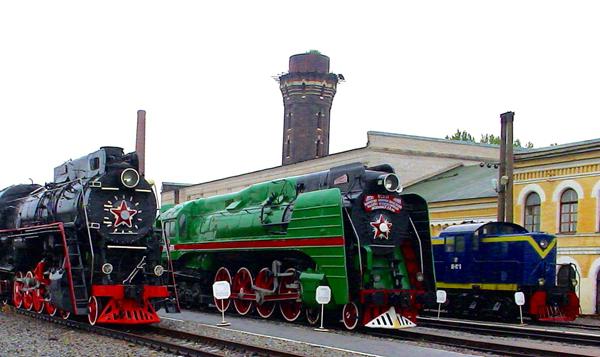 Why is this Museum called a textbook?

Because the vast majority of visitors are students. They visit the steam train Museum in St. Petersburg in order to obtain practical knowledge with regards to railroads and trains. Also, when there is the fans club for everyone.

In the building of the Museum exhibited only 3% of all models, but the staff compensate for this by leaving more than 10 times a year on events and exhibitions in universities and schools.

Currently, the steam train Museum in St. Petersburg has 50 thousand exhibits, which are presented models and models operating locomotives and trains. 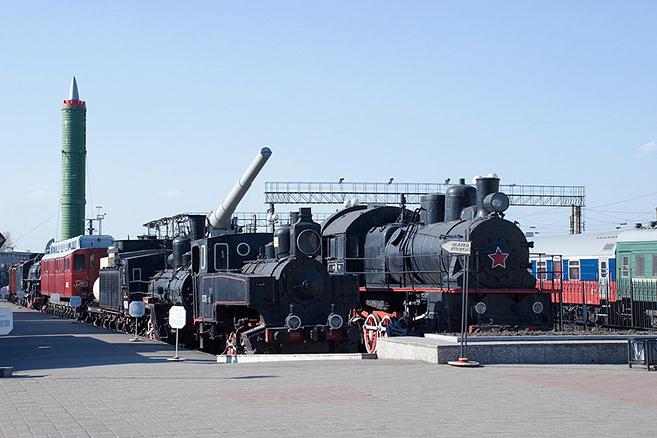 Where in Russia is the collection of steam locomotives?

Pay tribute to the history of rail transport and the city of Pereslavl-Zalessky. The steam Museum there is located near a small village. It contains exhibits from different eras. Trains with carriages (passenger and freight) are installed on the rails, and directly under the open sky.

Also there you can see models of snow blowers. There is even an exhibit made entirely of wood.

From Moscow to Yaroslavl highway, approximately 100 km to the town of Pereslavl-Zalessky. Steam train Museum is very famous in those places. It also has an indoor sheds where collected and other railway equipment.

In the Museum you can see the room where the original station equipment, and in another room to detail the interior flats of station duty officer.

The Attention of tourists are the military and farm equipment.

It shows a huge collection of narrow gauge rail vehicles: over 100 locomotives, electric locomotives and...

a good life... What is it, who can tell? How often do we hear this concept, however, in spite of everything, to answer certainly the question of how to live properly, no one can. However, this does not mean you have to throw yours...

At the end of 2013-beginning of 2014 the ruble has fallen significantly against the dollar. But by June the situation, as shown by the graphs of trading on the international foreign exchange markets have developed largely in favor...

In Moscow, there are a large number of bus terminals and bus stations, which are distributed in different areas of the city, but mostly near its center. Moscow – a very large city, so this distribution is preferable to the c...

The flag of the infantry troops of Russia: history, photos, description

“Mechanized infantry”, as they call infantry troops (MSW) in European countries, is the basis of the army. Marines using a variety of vehicles and trucks, carried out large-scale ground operation. Combat missions soldi...